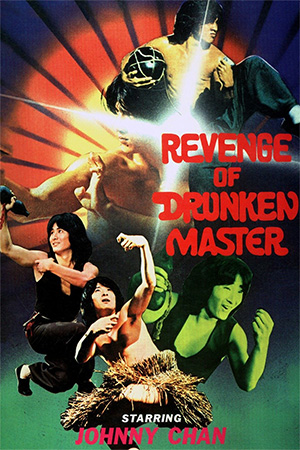 The old adage of imitation being the sincerest form of flattery must have been resolutely proven during the Brucespolitation era. Every person with even the merest appearance of looking like Bruce Lee – hair, eyes, top lip – found themselves in demand. Sadly, Lee didn’t live to see these ‘compliments’. Jackie Chan, however, might have cast his eyes over the gloriously convivial hug of recognition that is ‘Revenge of Drunken Master’ and no doubt found a warm glow within at the sight of Johnny Chan.

‘Drunken Kid’ (who is neither drunk nor a kid, though ‘Young Adult Who Can Hold His Drink’ does have the same gravitas) is one of those nomadic acupuncturists who roamed the lands in China before the purge. His speciality is making people laugh by hitting the right meridian in the body and helping the patient reach a state of euphoria. After using this gift to leave a local gangster in fits of laughter, the Kid finds himself a wanted man. This, however, is the least of his worries as when a clan desperate to wipe out Drunken Boxing targets him and his master, he must train afresh to fight the threat.

Godfrey Ho, as I do, might have lived near an Aldi when he conceived this and seen the effects of a gallon of rancid own brand cider on the human constitution. We’re of course talking about the kind of alcohol that even the goodly folks at ‘White Lightning’ would consider too astringent to sell to the town hobo. The reason I make such a claim, having studied the proudly inebriated outside my local branch, is that Ho takes away any skill or even glamour that Drunken Boxing might have attained after Jackie Chan’s ‘Drunken Master’. No, Godfrey Ho, utilising the narrative and various actors therein, concentrates on the proper dribbling incomprehension of the compulsive drunk, complete with that vague stench of stale urine that seeps off the screen. This is ‘Drunken Master’ as social commentary, a film that gives the viewer the experience of rolling down a hill in a barrel full of dirty razor blades without having to leave one’s home, a kung-fu film that proudly refuses to give us any momentary salve in the way of a decent fight scene.

Johnny Chan, who looks like a cross between a brutalised version of Jackie who has erred well away from the SlimFast plan and ‘Mighty Boosh’s Noel Fielding, has the dexterity of an asteroid and fulfils Godfrey Ho’s intention to bring earthy realism and misery to all who view this film. Chan is pitted against Eagle Han who, on this occasion, looks very much like Feargal Sharkey* during his ‘A Good Heart’ success of ’85, and who shows off a few passable moves that evaded the director’s watchful eye. The final fight sees Han kicked thirty feet in the air only to land perfectly in a coffin prepared by Drunken Kid and his master; a sure-fire way to please the Humanists in the audience who prefer their funerals without any alleged pomp.

‘Revenge of Drunken Master’ is the kind of ‘bad’ that actually gets into your bones.

(*The fact that I spent most of my time wondering who various members of the cast look like should inform you as to my thoughts on the film).