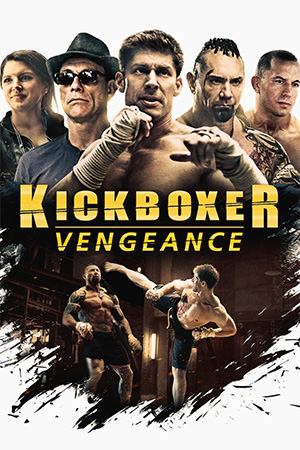 Hmmm. This reboot/remake of one of Van Damme’s finest hours, ‘Kickboxer’, certainly tries to recapture some of the magic of the genre defining original but unfortunately ends up a somewhat shallow effort. Ace stunt guy Alain Moussi is Kurt Sloan (Van Damme’s role in the original) who is out in Thailand gunning for revenge for the death of his brother Eric (Shahlavi) at the hands of evil fighter extraordinaire Tong Po (Bautista). In way over his over head, Kurt finds he’s no match for the formidable Tong Po. Realising he needs help if he is to fight Po, Kurt retreats to the sanctuary of his brother’s former trainer Durand (Van Damme). Here he surrenders to Durand’s unconventional training, readying his mind and body for the final showdown with the seemingly unstoppable Po.

‘Kickboxer’ is an absolute classic to this two-bit reviewer, endlessly re-watchable, packed with great fights and training montages and full of charm. Still one of Van Damme’s best, it was going to be hard to re-tool and re-sell this classic underdog story for a modern audience, even with the main man on board. Unfortunately, while there are good components here, they never gel into a satisfying or fully entertaining whole meaning one is left with what feels like a missed opportunity. Everything from the set up to the character’s relationships feel rushed and are simply there to service the next bout of Moussi ass kicking. This wouldn’t be a bad thing if one actually cared what was going on and if the fights weren’t such a mixed bag themselves. Choppy editing and shaky camerawork (ugh!) impede what is actually an impressive fight cast, as Moussi has the moves (but lacks Van Damme’s charisma). He also gets the bulk of the fighting action as he can certainly spin, kick and pull off some fancy moves but he possibly gets too much of the action meaning the rest of the fight cast are often underused.

The late great Darren Shahlavi (‘Ip Man 2’, ‘Bloodmoon’) is in and out of the film all too quickly though leaves a lasting impact in his few scenes, and while his sole fight scene is a missed opportunity he gets to show he was just as gifted an actor as fighter in his dramatic scenes, and would have actually made for a much better lead. Likewise George St-Pierre (‘Captain America: The Winter Soldier’) is vastly underused, his fight scenes (including a tussle with Van Damme) truncated but is an absolute hoot as a drunken fighter who pops up to both hinder and aid our heroes plight. He really should have been in it more. Many will also be disappointed Gina Carano (‘Haywire’) doesn’t get to fight but has a nice little part as a shady fight promoter presumably called in as a favour to her ‘In the Blood’ director John Stockwell. As mentioned there are a lot of fights and almost as many training montages but they miss the heart and zip of the original. In Van Damme’s ‘Kickboxer’, one actually felt like he went through a rigorous training regime to become a better fighter but here it always feels like Moussi is a great fighter and will be ok no matter how many quick cut training montages he does.

However, when not comparing the film to the one it’s rebooting/remaking, ‘Kickboxer Vengeance’ has enough decent elements to make it watchable. As mentioned, George St-Pierre is great fun as is Van Damme himself. Despite the inexplicable decision to have him wear shades for the majority of the film and have him dubbed (ala a dodgy DTV Steven Seagal movie!) for many of his dialogue scenes, the Muscles from Brussels is on fine form here, fighting fit and gets a few good tussles of his own. However, it’s Bautista who steals the show as the imposing Tong Po and while he only has a handful of scenes, he still makes for a memorable and imposing villain. In addition, his end fight with Moussi is a brutal doozy that ends the film on an exhilarating note. A full on 20 minute fight fest this is no anti-climactic finale but a brutal bout of sustained fight action harking back to the glory days of action cinema when the end fights were epic brawls.

So there is fun to be had with this reboot but the lack of heart that made the original so good and the feeling that some of the fight action could have been better means ‘Kickboxer: Vengeance’ doesn’t quite hit the mark. Still, nice to see Van Damme having fun and there’s a great quick blink-and-you’ll-miss-him cameo from the original Tong Po himself, Michel Qissi.