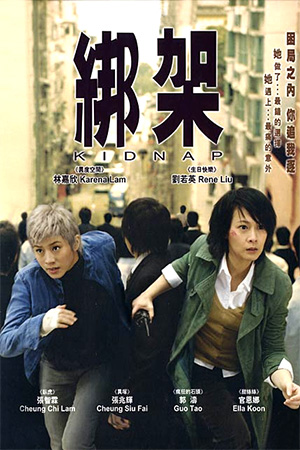 ‘Kidnap’ starts with a botched kidnapping that sees the brother of young choreographer Lam Hiu-Yeung (Lam) die in the process, partly due to ineptitude of the criminals involved and partly becase of poor planning by the police she was asked to trust. Years go by and Lam spends her time looking after her wheelchair-bound husband whose degenerative illness threatens to take his life shortly. Even though she still has intense anger about the loss of her brother, Lam and her husband have befriended Chi, one of the inspectors previously involved and try to piece together their lives. Her husband’s condition worsens and only an expensive operation in Switzerland has any chance of saving him. To this end Lam plots to kidnap the son of an odious millionaire and use her own experiences to conclude the matter peacefully. Yet the boy her accomplices capture is actually the son of Inspector Ho (Liu), one of the chief officers involved in the earlier tragedy.

Inspired by Kurosawa’s ‘High And Low’, Lo Chi-Leung’s ‘Kidnap’ is a taut thriller that piles on the tension and twists with each minute that passes. Starting off as what appears to be a typical police procedural flick, ‘Kidnap’ switches gears as the narrative progresses and fleshes out the main protagonists with admirable dexterity. Only during the climax do we see the director lose his nerve and allow the carefully built tension to dissipate, knocking a half star off what is a more than competent film.

The draw of Hong Kong cinema has often been its unpredictablity, its toying with the viewer, its lack of defined rules. ‘Kidnap’ returns to those heady days throughout most of its duration, pushing its two female protagonists to do things that are unexpected, yet logical in the context of their respective desperation. Lo Chi-Leung plays on their respective devotion to the ones they love, so much so that the lines of who is right and wrong becomes blurred throughout. This makes the last few minutes – the ones that directly follow a particularly off-putting use of CGI – a major disappointment in comparison to the 90 minutes that had proceeded it.

There are the aforementioned difficulties with maintaing the hard-edged direction of the opening hour or so, yet ‘Kidnap’ has more to commend it than to condemn it. Two strong central performances by Rene Liu and Karena Lam drive the story forward, making their varied plights much more realistic. Liu is especially blessed with a character who is pushed and prodded in all directions, going through the whole gamut of emotions in the process. The two main actresses share little on-screen time together, but their conversations still allow them to lock horns and test each other’s craft.

‘Kidnap’ is a flawed production, one that attempts to mimic the slickness of the post-‘Infernal Affairs’ Hong Kong thrillers. Nevertheless, the film zips along with the kind of pace that drags the viewer along, papering over any cracks as it goes through each scene. It’s certainly a cut above the standard potboilers and, while it may not stand the test of time, it deserves more recognition than its harsh initial reaction gave it.