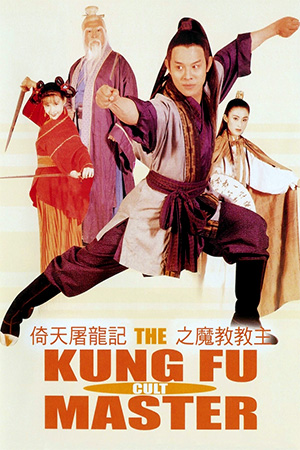 During a turbulent point in China’s past where numerous clans fight for supremacy, a young man (Jet Li) is gradually taught advanced fighting skills by a mysterious stranger. Although unwilling to learn initially, he realises that it is the only way to avenge his parents’ death and reverse the effects of a death blow he once received. Soon he is immersed in the clan intrigue around him and drawn into conflict against a motley crue of villains.

Whoever said that sarcasm was the lowest form of wit hasn’t seen Wong Jing at his worst. It is true that he’s directed some very enjoyable films in the past, but ‘Kung Fu Cult Master’ definitely isn’t one of them. The pairing of Jet Li and Sammo should have spawned a masterpiece, but instead the audience is left with this disheartening effort. Wong Jing’s low-brow humour fills this film without mercy and spoils all hopes of this being an action classic. The choreography is wire-dependent to the extreme, but still remains the only reason for watching this film; the finale in particular is watchable and well-orchestrated. Hong Kong film fans often name ‘The Master’ as Jet Li’s worst film, but it’s definitely a better film than this tripe.