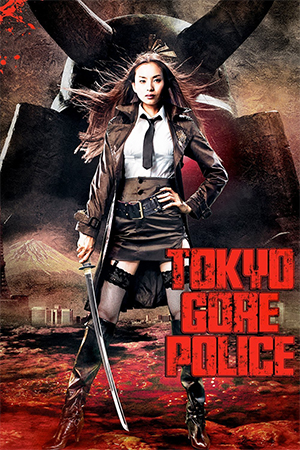 Well here is a film that certainly lives up to its title. ‘Tokyo Gore Police’ (TGP) is set in Tokyo, features their police force and is most certainly bursting at the gills (quite literally) with loads and loads of gore. It takes a certain amount of skill and wink-wink towards the camera to pull off this kind of gore drenched madness (‘Braindead/Dead Alive’ being the best of this kind) and ‘Tokyo Gore Police’, while pushing the limits of taste and absurdness, just manages to stay the right side of fun and skill to pull it off. We are not talking torture porn here but zany, over the top and often gross out gore. Its Manga gone live-action and quite possibly one of the maddest films you will see for some time. Oh yeah, it’s also very, very gory.

Tokyo, the near future. The police have gone private and will use any means necessary to enforce the law. Means that involve tearing people apart: the police are now the judge, jury’s and executioners. On the opposite side of the law are the ‘Engineers’, bio enhanced criminals who can turn a severed appendage into a hi-tech weapon. A man has his split in two: his brain and eyeballs become two head mounted cannons. A woman is chopped in two: her lower half becomes a giant set of crocodile jaws. A man’s arm is severed: it becomes a chainsaw. The Engineers are getting out of hand, causing rampant violence all over the city and it’s up to super cop Ruka (Shiina) to stop them. However, as her investigation deepens she realizes her fellow cops may be just as corrupt and overly-the-top violent as the Engineers pitting her for one very violent, limb-severing, blood spewing finale.

It’s kind of hard to describe ‘Tokyo Gore Police’. It really is unique and one will inadvertently descend into hyperbole trying to describe the events on screen, which if you hadn’t caught the gist: are extremely gory. Blood, guts and heads spew and fly about the screen in a comic book manner on acid. Political correctness is thrown out the window from the get go and things happen that can, well, only be got away with in a Japanese movie. There is not much of a plot but that is not a criticism and anyone looking for one or is likely to be aggravated that there isn’t much of one, is watching the wrong damn movie. ‘TGP’ is a film all about vivid surrealism and pushing the envelope on the amount of gore you can put on screen. Yeah many will argue it is there just for the sake of being there and some of it is but ‘TGP’ never sets out to do anything otherwise and it’s delivered with such demented glee and skill you can’t help but laugh and feel like vomiting at the same time. There is a good amount of sleaze as well, meaning the film does walk on the dark side and if you ever wanted to see a chair made out of a women’s body that then urinates all over a gleeful audience, well ‘TGP’ is for you.

While it does push its concept and levels of gore to the limit, for the most part ‘TGP’ is a lot of crazy fun. The unique visual style gives it a funky vibe all of its own and there are some clever references to ‘Robocop’, ‘Battle Royale’ and even ‘Planet Terror’. Eihi Shiina (from the equally messed up ‘Audition’) is the attractive antidote to all the carnage, remaining perfectly beautiful throughout proceedings no matter how much blood is thrown at the screen or herself. Everyone else hams it up as is expected as there is not much else to do when legs, heads and even penises are being chopped off. The effects are of a very high standard, director Yoshiro Mishimura being a special effects whiz, here making his second feature as a director. He also did the effects for similar gorefest, Machine Girl. There is also a neat cameo from ‘Versus’ and ‘Death Trance’ man, Tak Sakaguchi.

Pretty much living up to its gore soaked hype; ‘TGP’ is not a film for everyone or even every Eastern film fan. It’s extreme, it’s sleazy, it’s as mad as a bag of snails (and even features a woman who is half snail!) but it is a lot of fun. Don’t go expecting Peter Jackson’s ‘Braindead/Dead Alive’ but if you are a gorehound do go expecting a satisfying amount of gore and wrongness. Unique indeed.