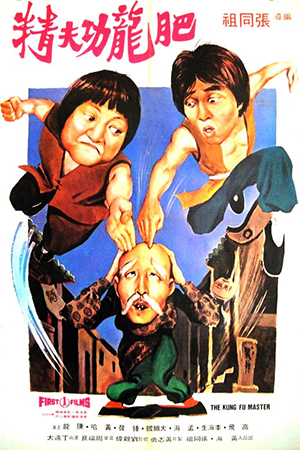 Many viewers’ first memories of Tung Wai are seeing him as a callow youth being instructed by Bruce Lee in the opening scenes of ‘Enter The Dragon’. Then some recognise him now as a highly respected and much in-demand action choreographer who has played a part in numerous recent Hong Kong blockbusters. ‘Incredible Kung Fu Master’ offers a pleasant surprise to viewers: the sight of Tung Wai in the leading role of a kung-fu comedy, showing off his very impressive skills.

‘Kung Fu Ching’ (Tung Wai) is so-called because of his love of kung-fu even though he is far from proficient at it and relies on the few scraps he manages to pick up from his two friends. After persuading his friends to put in a positive word with their respective fathers, Ching is given the opportunity of learning kung-fu properly. However, the two schools he has joined are bitterly opposed ever since a beaten Mongol fighter managed to turn them against each other. When they discover that Ching is a member of the other’s school, the young student is expelled from both schools. Fortunately, Ching meets a newcomer to town known as Fatty (Sammo – who else?) who sees kung-fu in a far more cosmopolitan way and compares it all to his other great love, food. Fatty agrees to teach Ching his amalgamation of various kung-fu styles and gradually – after painful training routines – the youngster develops into a formidable fighter. These new skills are quickly needed when the Mongol fighter returns swearing vengeance on the two warring masters who once defeated him and anyone else who gets in his way.

When awards for originality are handed out, ‘The Incredible Kung Fu Master’ will feature near the very bottom of the list; the oft-told tale of revenge and master/disciple relationships is once again recycled in this independent feature. Having said this, the film still stands as a good solid kung fu comedy with an excellent lead performance from Tung Wai and fine back-up from the typically impressive Sammo Hung. The comedy in the film is very broad and even invades the fight scenes with the finale being a prime example of this. Therefore, it’s soon apparent that nothing in this film is to be taken too seriously and even the conventions of hero v. villain are to be ridiculed. ‘The Incredible Kung Fu Master’ is certainly not among the best kung fu films ever made, but there is enough enjoyable action to make the viewing experience seem worthwhile.