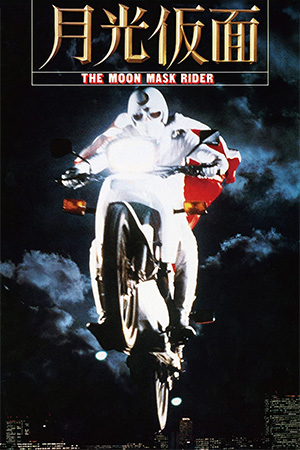 A series of robberies sweep through Tokyo leaving the authorities baffled as to who is responsible for the increasingly intricate crimes. The only person who seems able to foil the syndicate is another mysterious figure, heroic crime-fighter Moon Mask Rider who rides around bring law-breakers to justice. Through his hard work, it is revealed that the enemy is actually a doomsday cult led by a maniacal mastermind who is taking over the minds of Japan’s youth.

Kamen Rider of Gekko Kamen is one of those characters that is heavily entwined with Japanese culture, even crossing over into international recognition. Like a mix of Zorro, Robin Hood and especially The Lone Ranger, Kamen Rider (or Moon Mask Rider as he is here) dates back to a popular 1958 series and a subsequent series of films. ‘The Moon Mask Rider’ was the big budget attempt to drag the character into the 1980s. Unfortunately, despite its intentions, its neither deliciously loopy the way you might hope that a Japanese superhero film would be nor is it especially engaging.

The main problem of this bigger budget exercise is that the hero’s powers are never really defined. Not a problem if you are familiar with the character, but to those going in cold, it is a distraction. His main attribute seems to be his skill as a motorcyclist (and the ability to wear a cape without it getting caught in the spokes) and an indefatigable spirit that appears to beat the villains quite easily. Considering the manpower and arsenal they have, you might expect that the evil cult might need more than a crime-fighting Evel Knievel to beat them back. That might be some of the charm, but when he is detached from his bike, the hero is quite a limp figure.

The opening robbery set-piece promises much more than the subsequent one hundred minutes delivers. The action slows down considerably after the first ten minutes and the big battles between hero and villains lack any of the wonder you expect from a Japanese film. When there is a grounded fight it is barely above the Adam West ‘Batman’ film from fifteen years earlier. The final nail in the coffin of ‘The Moon Mask Rider’ is the quite baffling fact that proven action heroine Etsuko Shihomi, Sister Street Fighter herself, gets absolutely nothing to do; if you go into this expecting to see ‘Sue’ unleashing the moves the audience know she is capable of, your disappointment will verge on legal action.