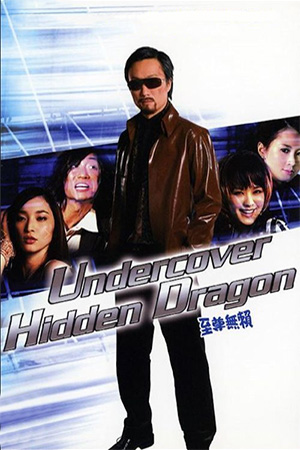 The fact that Ronald Cheng’s new film is directed by two award-winning directors is perhaps the final piece of the jigsaw to make him a bona fide Canto-comic superstar. That one of the directors, Gordon Chan, was also heavily involved in Stephen Chow’s early successes implies that Cheng is being groomed as a replacement to the ‘Kung-Fu Hustle’ star as his fame reaches a different stratosphere to fellow Hong Kong celebrities.

Pitiable triad foot soldier Fat (Cheng) is press-ganged into service by his twitching, stuttering boss and sent to assassinate the leaders of a rival gang. Aimlessly staggering into the villains’ den, Fat fails miserably and gets a severe beating for his trouble. As he recovers though, Fat is approached by three gorgeous policewomen (the attractive and ridiculously coiffured pop trio ‘Cookies’) who claim that he is actually an undercover cop suffering from amnesia. The eternal loser attaches himself to the idea and agrees to infiltrate his own gang and find out useful information on the squeaky voiced head (also played by Cheng). However, Fat faces crisis of conscience as he spends more time with his boss’ wife and rekindles the crush he had on her as a teenager.

From its opening scene to the crisply lit cinematography throughout, it’s clear that this is intended as a more professional Ronald Cheng vehicle than usual. Slick production values and two directors who have tasted success at the Hong Kong Film Awards back up this move towards firmly taking on the mantle of comic maestro of Hong Kong, if not Asia. Yet such moves seem very much at odds with a star who revels in silliness and absurdism. Not that a more mature approach to film-making should be a hindrance in itself; the juxtaposition of the preposterous and the slick can be an especially successful blend. Nevertheless, Cheng’s antics are wedged into the film rather than blended seamlessly, making for an awkward 100 minutes.

While ‘Undercover Hidden Dragon’ is unable to mesh together two disparate styles, there are moments that shine. The opening few scenes are perhaps the only times when Ronald Cheng’s dopey persona connects properly with the style of the two directors, mirroring the mixture well utilised in Gordon Chan’s ‘Fight Back To school’. In these scenes Cheng becomes the awkward loser who bumbles into a drama well above his experience and here lies the potential strength of the film. Unfortunately the main storyline stifles both star and style, becoming too preoccupied with a love triangle Fat finds himself in and the humour derived from mistaken identities. As if to compensate, a couple of incongruous comic scenes a forced in namely an extended ‘Masked Rider’ parody and a bizarre Chinese version of Boney M’s ‘Rasputin’ performed with a strange dance routine.

‘Undercover Hidden Dragon’ is better than the past few Ronald Cheng films, but not as consistently entertaining as ‘Super Model’, perhaps the benchmark for his comedy. Fans of his previous films will find enjoyment with ‘Undercover Hidden Dragon’ while those firmly opposed to his style are unlikely to be converted by his work here. For the many who may fall between the two opinions, this is enjoyable to a point though never substantial enough to make the duration pass by effortlessly.