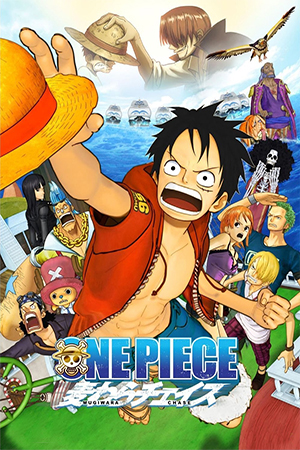 After he awakens to find his hat has gone missing, Luffy is frantic and so the entire Straw Hat crew set about trying to locate it. While out searching, Chopper and Usopp come across a sick pirate and bring him back to the Thousand Sunny for treatment. Meanwhile, a bird is spotted with Luffy’s hat and the crew begin to give chase. Unfortunately they failed to notice the marine ships and Sea Kings sneaking up on them, and now this is looking to be a whole lot trickier than expected.

Clocking in at just 30 minutes, ‘One Piece: Straw Hat Chase’ is the shortest of the ‘One Piece’ movies. It’s also the winner of the “most literal title” award as it really is just a story about chasing Luffy’s straw hat. As you can imagine, this means that it isn’t exactly loaded with depth but it does still find time to throw in a touching side-story about an old pirate and his best friend. However, it’s always clear that ‘One Piece: Straw Hat Chase’ was made to be a visual spectacle, and in this department it certainly succeeds. Utilising computer animation and 3D effects, the film has a very epic and vibrant feeling that really brings the world to life. The final (and only) fight is also brilliantly handled, with our heroes forced to make good use of their surroundings as they come up against some huge opponents.

‘One Piece: Straw Hat Chase’ is short and sweet, but it’s definitely a fun ride while it lasts. The new animation style makes it feel very unique and there’s a real larger-than-life approach to the whole production. Definitely a worthy addition to the collection of any ‘One Piece’ fan.