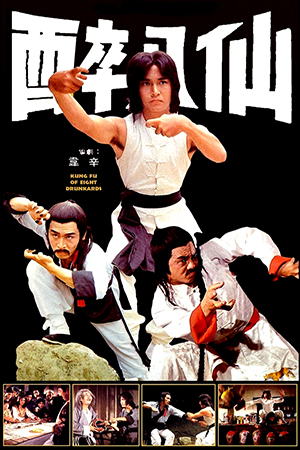 After an entanglement with a drunken, yet highly skilled beggar, a young restaurant worker vows to learn kung fu from his opponent and became as proficient. Persuading the drunken beggar to train him behind the back of his stern uncle, it is not long before the devoted student sees the fruits of his hard work and reaches a good level of expertise. The capability comes in particularly useful when another disheveled beggar is about to be given a serious beating and the self-righteous youngster feels inclined to come to the rescue. However, after the ensuing clash leaves the town bullies in a humbled condition, the shamed gang alert the rest of their cohorts who destroy the uncle’s restaurant. On seeing the results of his fight, the nephew and his beggar sidekick decide to earn money for a new restaurant. Trouble is again on the horizon when the pair are spotted fighting and the unique style they use is recognised as the technique of a wanted man. This arouses the interest of the fighter who had killed all but one of the exponents of the style, but now poses as a respectable town figure. Therefore he sends his men out to capture the culprits and find out where they learned the style from. Added to this is the appearance of a mysterious expert who has her secrets and a very surprising background. The answers are provided during the inevitable showdown.

It’s increasingly difficult to explain, in these reviews, the storylines of many kung fu comedies without sounding repetitive. Such is the nature of the well-trod path that every element seems contrived and a tired sense of deja-vu is present.  ‘Kung Fu of Eight Drunkards’ is interchangeable with most of the other independent productions of the time, the same strengths and weaknesses again apparent. Director Wu Ma (who had proved himself adept behind the camera with such films as ‘Deaf And Mute Heroine’) is here in control of a ‘kung fu comedy by numbers’; every possible plot strand is easy to recognise as is the exact moment they will occur.

While there’s little noteworthy here, there are the aforementioned strengths. Meng Fei stands out as a capable lead, drawing on the gentle arrogance of his Shaw Brothers days while adding a certain charm to the role. Wu Ma makes a welcome entrance as the hero’s sidekick and hints at the character skills that have always made him an asset to any film. Inevitably the fight action, though providing nothing startling, will surely pacify avid fans. The action may have been raised another notch if only ‘Kung Fu of Eight Drunkards’ hadn’t fallen foul of wasting much of its potential. Chan Sing is hopelessly underused and is given very little opportunity to prove his worth. This is also the case with Gold and Silver Tiger, two useful looking villains that appear with all kinds of expectation on them only to be defeated with ease by our hero. Annoyances like this make sure that ‘Kung Fu of Eight Drunkards’ provides more frustration than inspiration.