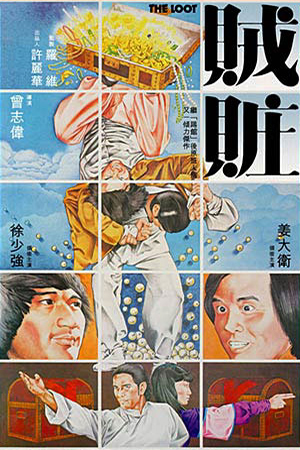 Yang Wei (Chiang) is a likeable wanderer who is gradually drawn into a world of intrigue by a gang of ex-bandits. With a series of robberies fitting the pattern of their old master ‘The Spider’, the frightened gang fear that their supposedly dead mentor is very much alive and intent on reacquainting himself with the double-crossers. Yang is hired to keep a firm eye on any possible suspects and discover if The Spider is back or if someone is just imitating him for gain. However, Yang begins to see the members of the criminal group dwindle one-by-one as the mysterious robber turns killer. He also becomes privy to the fact that the valuable stash from the gang’s last big robbery is still hidden somewhere and each of the remaining crooks are willing to stab each other in the back to get it. Into this already complicated scenario comes a stealthy stranger (Tsui) who has his very own hidden motives and wastes no time in getting involved in the hunt for the loot. All questions are suitably answered in the chaotic finale which takes place in the underground lair of The Spider and decides one and for all who will get the dazzling treasures on offer.

‘The Loot’ is another good example of the independent kung-fu world where smaller companies tried to find the winning formula that Golden Harvest and Shaw Brothers had tapped into. This hugely enjoyable feature achieves these goals and remains a favourite for kung-fu fans worldwide. The solid cast composes of familiar Hong Kong faces such as David Chiang and Tsui Siu Keung with each performer helping to add another layer of entertainment to the film. The most notable part of this is the fine chemistry between the two lead actors; so impressive was this that Chiang and Tsui reunited in ‘The Challenger’ and various other independent films. This engrossing team prove to be adept at the rigorous fight scenes and the subtle comedy that further lifts the film above the norm. Although increasingly hard to find on any format, ‘The Loot’ is worth tracking down as it has not lost any of its value after 20 years; it remains a very good blend of action, comedy and well-developed narrative.