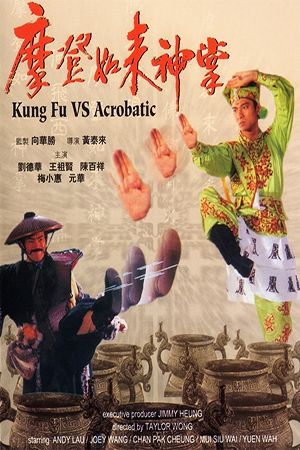 After years of viewing Hong Kong films it soon becomes apparent that there are two cinematic camps that most productions fall into. Firstly, there are the Hong Kong films that are easily accessible, readily enjoyed and almost certain to appeal to newcomers; in here you’d find ‘Police Story’, ‘Dragons Forever’, ‘A Better Tomorrow’, ‘Fong Sai Yuk’ and the like – films that would be familiar in construction and progression to Hollywood viewers. The next camp is full of bizarre and mind-boggling films – some good, some awful. Kung Fu vs. Acrobatic fits neatly into camp two and one could only imagine what someone weened on ‘Rush Hour’ and ‘Enter The Dragon’ would make of it.

Andy Lau and Natalis Chan are two friends who decide that, as they’re not getting any younger, this is the time to try and make a fortune. With this in mind, they travel to China to steal ancient treasures for prosperous re-sale in Hong Kong. Instead of orthodox treasures, the two stumble upon a cave inhabited by numerous statuesque figures – Joey Wong, Miu Siu Wai, Yuen Wah and Chan Sing. The bumbling heroes accidentally revive them after their 500 year rest and, knowing that Yuen Wah isn’t someone to be crossed, take the two ladies back to Hong Kong. A peeved Yuen Wah sets off in pursuit.

As has been said, ‘Kung Fu vs. Acrobatic’ is bizarre. Very importantly though, it is also an entertaining and pleasantly silly film. Andy Lau makes the most of his romantic lead and is given the delectable Joey Wong as his love interest – alongside some very strange special powers. Depending on what environment he’s put in, Natalis Chan can be either annoying or watchable and thankfully it’s very much the latter in this. The film really works on a purely entertainment level and seasoned Hong Kong film fans will probably be entertained by magical kicks, super-powerful laughs and an animated turtle. Enjoyable buffoonery.