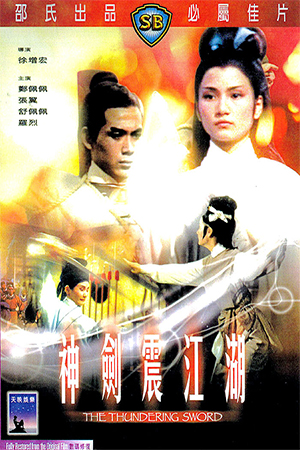 Taken from the same source material as the enjoyably bizarre ‘Web Of Death’, ‘The Thundering Sword’ is a late-60s execution that uses most of the same plot twists and turns. However, instead of the excellent Ching Li in the lead role, Cheng Pei Pei – perhaps the quintessential Shaw Brothers’ swordswoman – takes centre stage. Surprisingly, her love interest is none other than Chang Yi, an actor whose name is commonly associated with villainous roles in ‘The Victim’. ‘Challenge Of Death’ and scores of other kung-fu classics. The resulting blend is a dramatic, yet mostly watchable swordplay flick.

News breaks out in the martial world of an invincible sword that can cut through anything and has no equal in China. Naturally such a weapon is highly prized by China’s various clans; the righteous schools are keen to find it to stop it getting into the wrong hands while the ruthless clans are bent on total domination. Heroic swordsman Yu, along with his good friend (Lo Lieh) and an adoring classmate, is sent to track down the sword and bring it back to his wisened master. While travelling alone, Yu meets a beautiful swordswoman who over-eagerly kills a band of robbers trying to ambush her. Though this woman, Jiao, has a ruthless side, she also has a tender heart and falls in love with honourable Yu. Unfortunately, Jiao accidentally injures her lover’s loyal friend in her own quest for the ‘thundering sword’ and is desperate to compensate for this horrific blunder. Jiao therefore disguises herself as Yu and pays the noted Yue Security Agency to transport the injured man across China so that he can be cured. However, when the escorts are ambushed and the mission is thwarted, Jiao takes out her frustration on the surviving members of the Yue firm, though her lover Yu is blamed for the subsequent melee. The various clans gather to hunt down Yu for his ‘crimes’, while the sword falls into the wrong hands and the two lovers agree to marry. All three of these diverse incidents leads to the ultimately tragic conclusion.

As ‘The Thundering Sword’ seems to allude to the same inspiration, the comparisons to ‘Web Of Death’ are obvious: both films centre on the search for an unbeatable weapon; both have a ‘Romeo and Juliet’ style romance at their core; both have the same misunderstandings and both share most of the same characters; both star Lo Lieh (though in very different roles). However, the way the two directors tackle the subject is very different. In ‘Web Of Death’, Chor Yuen concentrated more on the action-based aspects of the narrative, the clan intrigues and the duplicitous characters. Meanwhile, Hsu Cheng-Hung’s ‘The Thundering Sword’ – shot a decade earlier –  takes away much of the tensions and focuses primarily on the tragic love of the two lead characters. Which of the two is more successful is probably dependent on familiarity with the source (of which I claim ignorance) and whether the potential viewer craves action or drama. Of their kind, both attempts achieve most of their respective goals.

While ‘Web Of Death’ undoubtedly suffered from the ending scenes of the ‘fearsome’ spider running amok, ‘The Thundering Sword’ takes the safe route with a weapon that is both probable and believable. Nevertheless, it is a film that often belies its operatic roots with heavy scenes of melodrama and theatrical acting. Though it takes a more realistic approach to its storyline, it is harmed by these moments of histrionics and grand gestures. Among the fresh-faced supporting players, there are faces like Ku Feng and Tien Fong who also get sucked into the heavy-handed scenes of sacrifice and tragedy, adding to the feeling that this is a production that shows its age. There are scenes that succeed in conveying a real intensity and power that breathe life into the storyline, but there are a few too many moments that go some way over-the-top, especially towards the end.

‘The Thundering Sword’ is archaic and does struggle to overcome its deficiencies, but it is given a significant boost by its two lead stars. In one of his few roles as the hero, Chang Yi is a sympathetic lead who mixes the persona of invincible swordsman and vulnerable lover with conviction. Though he doesn’t quite achieve the gusto of Yueh Hua’s performance in ‘Web Of Death’, it is still nice to see him in a different light. While Yi is good, this is of course Cheng Pei Pei’s film and she carries most of it with aplomb. Even in the more awkward moments of operatic drama, she lights up the screen with her wide range of emotions and expressions. It’s testament to her that the audience forgets just how ruthless Jiao initially is and that her thoughtless actions are a mere cry for love. Cheng is convincing  when she is the expert swordswoman and the dewy-eyed love interest – a quality that few actresses outside of Asia ever come near to replicating.

Cheng Pei Pei’s excellent performance and the moments of genuine emotion manage to excuse some of the film’s less enjoyable sequences. While it hasn’t aged well in comparison to ‘Come Drink With Me’ and even some of Chang Cheh’s early work, it still proves to be a mildly diverting Shaw Brothers’ swordplay film.