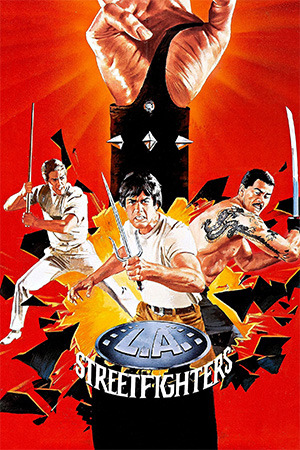 Ack! ‘L.A. Streetfighters’, or ‘Ninja Turf’ as it also goes by (though there are no actual ninjas featured!), should have been a whole lot of martial arts fun. It’s directed by Woo-sang Park who gave the world the sublime ‘Miami Connection’, its stars that one guy (!) Jun Chong (‘Silent Assassins’ and ‘Street Soldiers’), features earlier appearances by Phillip Rhee (‘Best of the Best’) and James Lew (‘Red Sun Rising’), the legendary Bill Wallace (‘A Force of One’) plays one of the bad guys, Loren Avedon (‘King of the Kickboxers’) is also in there somewhere and the flick has a fair amount of martial arts action.

Alas, despite all these cool factors ‘L.A. Streetfighters’ was just too dumb and not enough fun. Chong and Rhee play two high-schoolers (though look 20 years too old!), who like to cruise around, act cool and in one baffling tender scene share some birthday cake with one of their mates and cry over how tough it used to be for them. When they take a job as security for some sort of criminal douchebag the two decide to steal a bunch of drug money which inevitably leads them into a heap of trouble and crossing paths with the very evil James Lew and Bill Wallace. Much absurdness ensues.

Now that all sounds like a recipe for a fun B-movie but unfortunately ‘L.A. Streefighters’ too often tips over from the so-bad-it’s-good to the just so-bad-it’s-bad. Whether it’s the non-existent plot and dialogue (which has been dubbed and consists of countless filler scenes of the guys hanging around, doing nothing and simply saying “Yeah!”, “Cool!”, “Alright!”, “Yeah see you later!”), the incoherency of the whole thing and that, unfortunately, the DVD copy viewed for this review was so dark it was hard to decipher what was going on most of the time (a majority of the film being shot at night!) meant the film even stretched the patience of this die-hard trash movie fan. Fans of the absurd will delight at the often random and bizarre nature of the film including such scenes featuring pudgy crop-top wearing bad guys, the aforementioned birthday cake scene and the odd sight of a gang member wandering around a liquor store playing a giant flute for no discernible reason!

I really am making this sound a lot more awesome that is actually is! Fair play to the guys as this was an early film for many involved and there is some decent fight action (when you can see it!) including an impressive dust-up at a desert farm location. The cast are all gifted fighters and the film does pack in a fair bit of martial arts, just a shame the rest of the film is so amateur, haphazard and, well, naff.