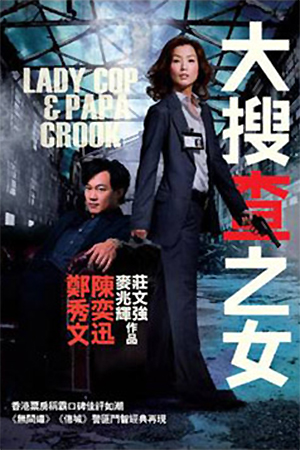 Former Hong Kong screen queen Sammi Cheng, who has since seen her star faltering somewhat, returns to her quirky roots with ‘Lady Cop & Papa Crook’. Having experienced professional and personal difficulties during the shooting of ‘Everlasting Regret’, it’s certainly good to see the charismatic Cheng as we remember her from the heyday that started a decade ago. Unfortunately this is not the big screen vehicle to offer her the place she once had at the top of the Hong Kong cinematic pantheon, despite a solid box-office showing throughout Asia.

Sassy cop Maureen Szeto (Cheng) faces the challenges of a relationship that is steadily heading down a cul-de-sac and a biological clock that’s almost deafening her. These personal considerations are constantly on her mind as she is assigned a kidnapping case involving the son of a young triad kingpin John (Chan). John and his dubious associates are less than happy to have the other side of the law helping them in this matter, afraid that the police will see this as an opportunity to dig deeper in their affairs. Maureen has one eye on their illegal dealings, but gradually uncovers a conspiracy within John’s own cadre that has lead to the kidnapping.

With its theatrical version shaved of 6 minutes by Chinese censorship, I chose to view the directors’ cut to give the fairest evaluation of Sammi Cheng’s return. For those who have only seen the former version in cinemas, it’s very doubtful whether those extra moments are going to lead to a startling revelation as to how grand this film is; simply put, no amount of added footage can shore up what is a flabby, inconsequential work. The restored vision of directors Alan Mak and Felix Chong may only be 98 minutes long, but the idea of losing a small percentage of it doesn’t upset as much as it should.

That old problem that Hong Kong films used to pole-vault over proves to be harder to address today. In the past, an odd-ball comedy could have a happy union with a thriller or action flick, but now it just ends in a messy divorce where neither side ends up with custody of the story. Maureen Szeto has walked out of one of Cheng’s older rom-coms and straight into the middle of a diluted ‘Infernal Affairs’-style drama, doesn’t take the hint to get her coat and leave, saunters around the narrative awhile, then adds to the feeling that the directors were about as united on this story as Romulus and Remus.

Interest is created in ‘Lady Cop & Papa Crook’ by its style and verve, yet the story and characters are successful in doing the opposite. Maureen’s eccentricities are overplayed, her comic scenes almost vaudeville and her personal dramas uninvolving. A protagonist racked with idiosyncracies can work in a serious narrative (‘Columbo’ springs to mind), but the film-makers have to be cautious as to how far these quirks are to be portrayed. As soon as Chapman To pops his head into the film, we know that any chance of real balance has just flown south for the Winter.

‘Lady Cop & Papa Crook’ should have been a solid return for Sammi Cheng, either an unapologetic rom-com or a thriller with moments of realistic humour. To try to weld the divisive elements together is unlikely to please anyone, except maybe Cartier whose brand is shamelessly flaunted on the screen as if it were a panacea for mankind’s ills. All I know is that the disappointment of my beloved Hong Kong cinema being wasted – as are the undoubted talents that are behind of and in front of the lens – on this glossy mess left me with a heartburn that all the Gaviscon (my turn for product placement *BUY GAVISCON*) in the world couldn’t alleviate.