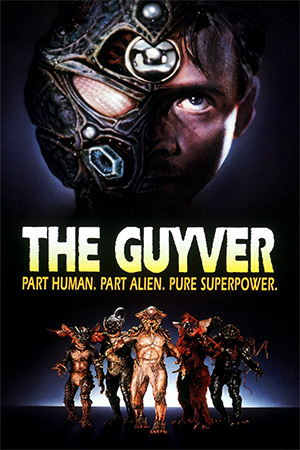 At the beginning of time, aliens came to earth in an attempt to create the ultimate organic weapon. They created mankind. By planting a special gene into man, they also created the Zoanoids – humans who can change into superhuman monster soldiers at will. Among the alien remains was found the “Unit”, a bio boosted alien armour that increases the natural powers of the wearer a hundred fold. Eons later, an innocent college student by the name of Sean Barker stumbles onto the unit and is suddenly transformed into a cyborg superhero. Unfortunately, it isn’t long before strange creatures start appearing to try and take back the device, leading Sean to uncover a secret plot to genetically engineer terrifying monsters.

If you’re looking for an accurate representation of Yoshiki Takaya’s ‘Guyver’ manga or any of its anime adaptations, then it’s probably fair to say that ‘The Guyver’ isn’t the movie for you. Whilst it may feature a number of elements from the original story and a decent visual representation of the main character, it’s the film’s openly tongue in cheek attitude and slapstick sense of humour that prevail. Playing out a bit like an adult version of ‘Power Rangers’, the film clearly takes its cues from the 80s and 90s Hollywood comic book conversions and successfully makes up for its flaws by providing a number of men in ridiculous rubber suits and unintentionally amusing dialogue.

Similarly, the film’s acting talent isn’t exactly the cream of the crop but there are still a couple of appealing actors on show. Mark Hamill is billed as the film’s main star (surely a statement in itself) but surprisingly doesn’t portray the Guyver. Instead, he resigns himself to taking a role that doesn’t require a rubber suit and convincingly fills the part of a CIA agent. Fan favourite Michael Berryman and ‘Re-Animator’ star David Gale also stand out, as both are highly underrated actors who are more than capable of impressing in this particular environment.

As for the action on display, this is rarely taken all that seriously but definitely suits the film’s overall style. The majority of the Guyver’s moves seem to be Aikido inspired and include a lot of quick takedowns mixed in with a few superhuman jumps and acrobatic flips. Considering the obvious restrictions of the rubber suits, the majority of these scenes are actually rather impressive and I remember being quite captivated when I first saw the movie as a child (and prior to my discovery of Asian cinema, of course).

‘The Guyver’ is clearly some distance from the original source material, but it is still a movie that can be immensely enjoyable if approached in the right frame of mind. If you fancy a film that falls somewhere in-between ‘Teenage Mutant Ninja Turtles’ and ‘Gremlins’, then this is certainly a step in the right direction.