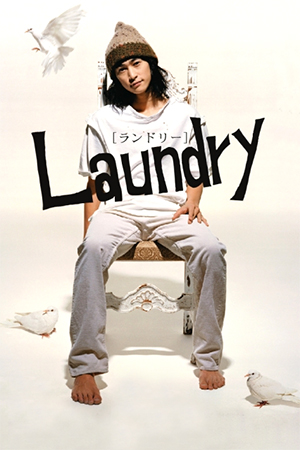 A simple premise is given an untold amount of feeling and that gentle Japanese magic by director Junichi Mori. I once again find myself repeating, to universal moans of boredom, the mantra that, when it comes to handling stories about the finer emotions, Asia is hard to fault when they produce works of this quality. While the majority rarely reach the heights of ‘Laundry’, many Asian productions still know how to reach the heart without bypassing the brain or soul.

20 year old Toru leads a content existence with his grandmother and spends his days acting as a makeshift security guard at her laundrette. Despite constraints forced upon him by a mental illness caused by a blow to the head as a child, Toru forges ahead with relative independence and passes his days interacting with the various colourful characters who frequent the area. A minor event breaks up this gentle routine as the ever-watchful young guardian sees a somnolent woman leave one of her garments behind and elects to chase after her to return it. The woman, Mizue, seems genuinely touched by Toru’s simple act and clings to him as she recovers from an unspoken heartbreak. Mizue eventually decides to return to her home town, but once again leaves a solitary garment at the laundrette that by this point has been sold by Toru’s grandmother. Without the daily connection to the shop and its clientele, Toru decides to travel across Japan to once again return an item to Mizue and continue their simple friendship. Teaming up with a bad-tempered travelling salesman, he arrives some distance from home, ready to put humanity back into Mizue’s fractured life with another act of quiet altruism.

The central pivot of ‘Laundry’ is the way one understated act of consideration can not only save someone’s life, but also give it meaning again. Such a dynamic may appear fantastical and in danger of being enveloped in old fashioned schmaltz, but ‘Laundry’ is so beautifully realised and so infused with tragic understatement that it pulls of the concept with elan. It is the rare occasion where two hours seems a fitting duration for what proves to be a thoroughly involving narrative, a sublime mixture of episodic drama and Japanese road movie. The latter has so often been used as a platform for philosophical musings and here director Junichi Mori utilises its conventions to contemplate friendship.

The film opens with a very matter-of-fact narration by Toru where he explains the causes of his mental illness and the relationship he shares with the people in his neighbourhood. The fact that an often overused cinematic technique illuminates briefly, then lets the on-screen drama unfold unhindered is the first triumph of ‘Laundry’. It takes only a few moments to explain how our lead character proved to be in his current situation, his fears and the limits imposed upon him to set the story up for the next couple of hours – the technique is mirrored later by Mizue, but again the it is never over-used. Toru is a welcome representation of a young man troubled by mental illness, moving away from him being either a danger to mankind (as some films still perpetrate) or just an excuse for a series of show-boating ‘Give Me A Best Actor Award’ scenes for the lead actor. Not that Yosuke Kubozuka doesn’t deliver an excellent performance anyway, but at least the film is not manufactured just to be an advert of his skills.

As ‘Laundry’ progresses from an intriguing character-piece to a delightful evocation of companionship, Mori opens up a number of sub-plots that delicately protrude out of the main narrative. The cause of Mizue’s nervous breakdown is pieced together as is her return to her reticent family and her subsequent attempts to befriend he sister again. Each extra strand weaves together to create an exquisite tapestry of pent up emotion and careful consideration, eventually leaving a set of situations that do feel more than just a cinematic contrivance. If Hollywood ever gets its grubby mits on this, expect Toru and Mizue (renamed Tom and Mandii – quirky spelling denoting an unusual character rather than a cipher) to leap into bed together after three minutes, proceed to stare blankly at one another for the following two hours to the accompaniment of a variety of deafening pop tracks, then struggle with that beloved ‘angst’ that dramas from the West think envelops most of our lives.

‘Laundry’ is Japanese cinema where the artistic goals are achieved without sacrificing the humanity behind them. In a world where the relatively high-brow equals a paean to a stoicism that none of us ‘ordinary’ people can relate to, ‘Laundry’ is stirring and filmed with admirable brio. There are a few too many uses of obvious symbolism (released doves repeated throughout), yet Junichi Mori keeps us absorbed in his work. The inclusion of the dove breeder/travelling salesman is nearly worthy of a half star on his own, but ‘Laundry’ is predominantly the story of two people who need a friend. While that may not sound much to hang a film on, this production has a great deal on offer.