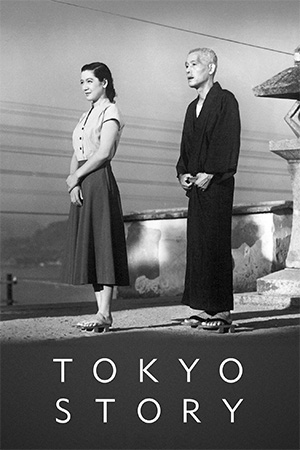 ‘Tokyo Story’ recently hit headlines after being named as the greatest film of all time by a leading critic, a position perennially given to ‘Citizen Kane’. While it’s obvious that such accolades are fatuous (how can one genre be compared to another or how can the varying styles of each country be pitted against one another?), the appeal for such lists is universal despite their limitations. With such a lofty award bestowed upon it, I was more than a little intrigued by the proposition of this widely revered masterpiece.

An elderly couple decide to make the long journey across Japan to visit their successful children in Tokyo. On arriving in the capital the parents are lavished with attention as the children and grandchildren eagerly welcome them to their humble abodes. However, as the first day passes, the various affairs of the children begin to crowd out the time they had intended to spend with their parents. Eventually the resolve to send their mother and father to a health spar rather than change their own schedules or leave them at home alone. Though the ever humble couple enjoy the gesture, they gradually realise that their children are too busy with their own lives to devote any real attention on them and they therefore decide to make a premature journey to the distant home. When the frail wife suffers a stroke and is said to be on her death-bed, the selfish children drop their various interests to rush to her side. Nevertheless, their brief moment of compassion is stirred up mainly due to social expectations rather than a real sense of sadness.

Few films have hidden such a strong sense of nihilism underneath a veneer of placid family drama. Starting as a warm reunion between blood relatives, ‘Tokyo Story’ gradually uncovers the various layers hidden within its structure, revealing the real message from hugely influential auteur Yasujiro Ozu. Ozu picks apart the sad decline of the Japanese family and the gradual erosion of bond between parent and child; by using such a contrasting cast of characters, his message leaves an indelible mark in the viewer’s mind long after the end.

The underlying themes of ‘Tokyo Story’ retain a resonance in the 21st century. The unfortunate gulf between some elderly parents and their children remains an issue as powerful today as it was in 1953 and Ozu’s masterpiece avoids any contrivances of the era to retain its potency today. By making the divide gradual, starting the storyline as a celebration, Ozu allows the audience to empathise with the main characters before their real intentions become apparent. All of the children seem completely devoted to their long-suffering parents during the opening frames of the film and the pretence is allowed to remain until Ozu throws in external factors to illustrate his intentions. As the parents become more of a burden on their children, the warning of taking those we love for granted begins to loom on the horizon.

The characterisation of ‘Tokyo Story’ is one of the crowning glories of this classic work of cinema. Though the children are progressively difficult to warm to, the parents are also shown warts and all. Though for most of the film they amble along harmlessly, one notable scene implies that the father’s expectations of his children may have contributed to the sad outcome. Though, ultimately, the final scenes cement the thought that the progeny have little regard for those that reared them, Ozu remembers the comparative mistakes of all involved. Added to this measured writing is the addition of the character Norika, the widow of the couple’s late son, who shows how the bond between people isn’t necessarily determined by blood or genetics.

Is ‘Tokyo Story’ the greatest film ever made though? As mentioned earlier, such an award is virtually impossible for any production to win, so personal taste plays a significant part in any such decision. For my taste, the first hour was perhaps a tad too ponderous and didn’t really grip fully until the second half. Ozu’s meticulous direction does make even these slower moments engrossing though and the final twenty minutes is sublime cinema. Really, whether ‘Tokyo Story’ is the greatest film of all time is irrelevant; it is undoubtedly a wonderful work of art that is fresh and poignant over half a century later. It is left up to just one two line exchange to sum up the prevalent air of melancholy that flows through ‘Tokyo Story’: ‘Isn’t life disappointing?’ the couple’s youngest daughter comments concerning the unfortunate divide between generations – ‘Yes it is.’ sighs the fractured character Norika.