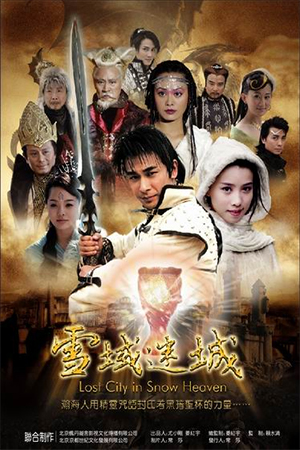 When he replaced Jet Li in the ‘Once Upon A Time In China’ series, Vincent Zhao (AKA Chiu Man-Cheuk) was touted as the next big martial arts acting sensation. Sadly, somewhere along the line this all went pear shaped and he made the inexplicable transition from movie star to low budget television actor in the blink of an eye. When I stumbled across this film on DVD, I was curious to see what he had been up to and held out vague hopes that he was still capable of impressing, even if only in the action department.

Many years ago, conjurers ruled the world but now the only evidence remaining of their existence is the mysterious “Dark Grail”. This holy artefact is said to wield much power and becomes the centre of a worldwide war to obtain it’s secrets. During these battles, the Grail is lost but it is said that it’s reappearance will signify a catastrophic disaster, the likes of which mankind has never seen. Luckily, legend has it that the unity of the Lion and the Butterfly, children from two feuding factions, are the only forces that will be able to restore peace. Will they be able to put their differences aside for the greater good or will the forces of evil triumph?

Although ‘Lost City In Snow Heaven’ is marketed as a movie, it is in fact a scaled down version of the 2005 Chinese television series of the same name. The general idea of the piece looks to have been to create a fantasy epic, a sort of ‘Lord Of The Rings’ meets ‘The Storms Riders’, but through a combination of weak material and cheap effects this proves to be a disastrous decision. Speaking from a film perspective, the story has been very badly spliced together so that characters appear and disappear without reason and the general focus of a simple plot gets lost about half way through. Considering how heavily the production also relies on special effects, it doesn’t help that they appear to have been created on a ZX Spectrum whilst the costumes and sets were seemingly stolen from the old 1950s ‘Flash Gordon’ series. None of the cast really stand out either as Zhao strikes me as too old and static for his role as the “young” prince and the bad guys are so faceless and bland that I even lost track of who they were until the finale. In fact the only real reason I kept watching was for the promising Shi Yanfei who I’d be happy to see more of in the future.

Those of you hoping that the martial arts abilities of Vincent Zhao would redeem this feature are also in for a big let-down. The shoddy effects once again take centre stage and the majority of the combat involves an actor leaping up on wires and shooting out some sort of lightning bolt to blow everyone away. As if this wasn’t bad enough, the director also has the bright idea of shooting all of the fight scenes on a shaky handheld camera and then employing motion blurring to try and disguise the bad camera work. Wait though, because it gets better as the piece de resistance comes when they decide to speed up the film while the actors aren’t actually clashing blades so this adds Charlie Chaplin-esque movement that will make you laugh out loud.

Whichever way you look at it, ‘Lost City In Snow Heaven’ isn’t a very pretty picture and I’d be amazed if anyone walks away from it with any degree of satisfaction. Thankfully for Vincent Zhao fans, there is light at the end of the tunnel with his upcoming role in the new Yuen Woo-Ping movie, ‘True Legend’. Until then though, I’d strongly suggest you don’t get tempted to find out what he’s been up to in the last few years and avoid this at all costs.