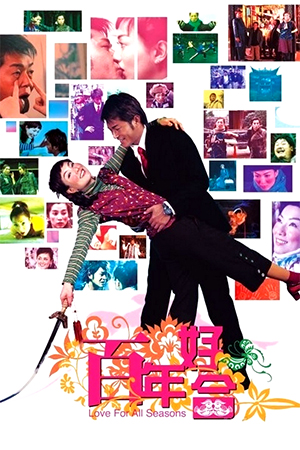 Tiger Hung (Koo) is a licentious playboy who is legendary for the trail of broken hearts that have been left in his wake. The down side to the actions of this outrageous lothario is that, when he contracts an incurable illness, two of the only three places that can cure him refuse to help. The third such option is less discerning about their clientele and invite him to make the trek to the top of Omei mountain to receive treatment for his sensitive problem. Tiger is sceptical about the abilities of these supposed yokels until he sees the abilities of head teacher May (Cheng) and her all-female staff, then he submits to the unorthodox regimen. May toys with her patient as a retribution for his behaviour towards women, but eventually cures him and sends home before her fearsome sister, Misery, arrives back at Omei.

While Tiger is back to his philandering ways in cosmopolitan Hong Kong, May is confronted by Misery who has been driven insane by a broken-heart she’s sustained. Promising to destroy Omei before she kills herself, Misery seems too powerful for May and it is only due to a temporary recall of sanity that everyone is spared. Such a momentary respite in the shattered mind of Misery also affords her the chance to tell he less skilled sister how she can be defeated before the insanity returns: only the ‘Heartbreak Sword’ style can release the power to give May victory and preserve Omei. The only problem is that May needs to fall in love, then have her heart shattered – a challenge for a hermit-like woman hidden up in the Chinese mountains. Cue a trip to Hong Kong and an uncomfortable reunion with the master of heartbreak, Tiger Hung.

With a bolshy heart beating within its frame that is resolutely Asian, ‘Love For All Seasons’ is a rom-com that refuses to be conventional. Just from the above synopsis, it’s obvious that ‘Love For All Seasons’ is quite unlike any other ventures into the genre. Such a surprising way of handling the age-old boy-meets-girl storyline is obviously more likely to be susceptible to difficulties and issues with balancing necessary elements. While this is the case with Johnnie To and Wai Ka Fai’s unusual work here, ‘Love For All Seasons’ is a refreshing change from a cinematic staple and a reminder of the fact that To can impress no matter what genre he works within.

Though Sammi Cheng has recently attempted to break away from the quirky rom-com heroine roles that have arguably made her the most popular actress in Hong Kong, ‘Love For All Seasons’ shows how adept she is at these character arcs. Her performance here is particularly appealing and plays to all the strengths that have made Cheng the undisputed queen of this genre; she is shown as shy, vulnerable yet resourceful and somewhat eccentric, all the ingredients that make May an interesting foil. Importantly though, every good work of this type relies just as much on a charming leading man and the chemistry between the leads. Louis Koo is excellent as the hopelessly self-infatuated Tiger, showing a fine line in self-deprecation alongside his matinee idol looks. Crowned with a mullet and making George Hamilton look anaemic, Koo infuses a potentially unpleasant character with a subtle charisma that is a credit to the film. The sparring between Koo and Cheng gives this already enticing work a real energy and vitality.

The concept may take a little getting used to, but ‘Love For All Seasons’ is a superior vehicle for Sammi Cheng and an enjoyable mixture of zany plot twists, comedy and romance. Difficult to describe and infectious throughout, this is an example of Hong Kong cinema playing to its localised strengths.