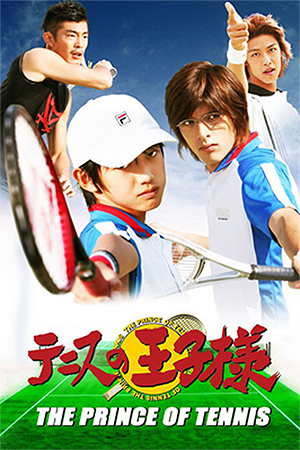 Although I’m not normally a fan of sports-based manga/anime, ‘The Prince Of Tennis’ is one of the few series that I’ve actually enjoyed. This is not due to any major love for the game, it’s simply because it features an entertaining story that contains some interesting characters and fantastically over-the-top tennis matches. That said though, when it comes to live-action adaptations we all know that it can be a totally different ball game (you see what I did there?) so is this movie an ace or just a double fault?

After winning all of his matches in the USA, 12-year-old tennis prodigy Ryoma Echizen is brought back to Japan by his father and enrolled in the prestigious Seishun Academy Middle School. Although he doesn’t understand the move, the school is in fact famous for its tennis team and Ryoma soon finds himself playing alongside school captain and national player Tezuka Kunimitsu, cool-headed Oishi Syuichirou and the acrobatic Kikamura Eiji. He also attracts the attentions of Higaki Shioin, a strange and quiet girl who watches him attentively from the bleachers. As the pressure from both his father and fellow team mates begins to rise, can Ryoma meet the challenge and earn the title of Prince Of Tennis?

Translating a comic or animated show to a live-action movie is no easy task, but ‘The Prince Of Tennis’ is certainly one of the best adaptations I’ve seen. Part of the reason that it works so well is because it sensibly sticks very close to the original material. Most of the crucial scenes are recreated to great effect and the film genuinely looks and feels like the source. It also helps that all of the characters are introduced in the correct manner, satisfying existing fans as well as giving newcomers a good grasp of the basics. Of course, none of this would matter if the story was lacking but thankfully this too works out pretty well. While it’s not exactly overflowing with depth, it is a perfect starting point that allows the audience to get to know and appreciate everyone involved.

When it comes to the film’s casting, it really is spot on. Not only do the majority of actors look the part, but they also do a really good job of capturing their signature traits. 15-year-old Kanata Hongo is right on the mark as Echizen and provides an exceptionally mature performance for his age. Unlike a lot of child actors, he never comes across as obnoxious and manages to convey the quiet and contemplative elements of his character without ever appearing arrogant. Yuu Shirota (Tezuka), Sayuri Iwata (Shion) and Kousuke Kujirai (Kaidou) are also particularly outstanding, and they all slot perfectly into their roles while avoiding the temptation to ham it up.

For a film that uses tennis as its main focus, I’m also pleased to report that all of the matches in the film are extremely well shot. Considering the erraticness of the game, you may expect there to be some issues with the flow but they are amazingly realistic and there’s a tenseness to the matches that is often lacking in most sports movies. The superhuman techniques of the players are also well represented and aside from a few bizarre flying manoeuvres, the CGI is very impressive and certainly right up there with the likes of ‘Shaolin Soccer’.

Understandably, the time restraints of the movie do cause some upsets and a number of popular characters and sequences are noticeably glossed over. This is particularly true for several of the Seigaku team and (a much younger and prettier) coach Ryuzaki, who all take a back seat so that Echizen and Tezuka can become the central focus. For the sake of the film’s story this is clearly the best approach, but from an existing fans’ perspective you do miss out on several entertaining personalities. Similarly, some of the early bouts with the Seigaku team are much shorter than they originally were but once again, this works in the film’s favour as it makes the final matches that much more exciting.

If you’re a fan of the manga/anime or enjoy superhuman sports movies like ‘Shaolin Soccer’, I would strongly advise you to seek out ‘The Prince Of Tennis’. It shows exactly how a live-action adaptation should be done and ignores the hype in favour of providing an accurate and fun representation of the source material.