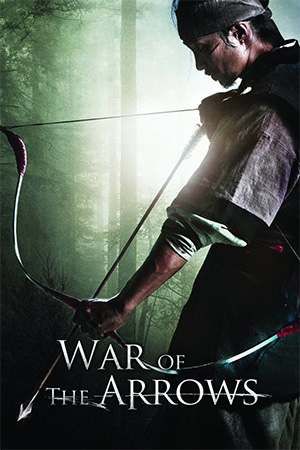 I always find myself starting reviews of local blockbusters talking about box-office numbers which is hardly the greatest arbiter of quality. Yet such was the immense success of Kim Han-Min’s ‘The War Of The Arrows’, which lay waste to the autumnal competition even usurping ‘Sunny’ from the top of the 2011 local film charts, that I have to bring this fact into the occasion. It’s no surprise to see another big-budget blood and thunder historical epic, but could anyone really have predicted this level of success?

A famed archer is killed in an assault on his family by forces faithful to the king, keen to wipe out any vestige of the previous regime. His sacrifice is not in vain though as it allows his two young children to escape the slaughter and head to the home of a close friend of their father’s. The two children, Nam-Yi and Ja-in, are raised by the adopted father, but while the daughter flourishes, the son becomes a apathetic wastrel.

On the wedding day of Ja-in to her childhood sweetheart Seo-Goon, a vast Manchu army sweeping through Korea attacks the kingdom, kills or enslaves most of the population including the young lovers. Ja-in’s brother avoids the tyranny and uses his inherited skills as an archer and tracker to hunt down those responsible, employing guerrilla tactics against overwhelming odds.

‘The War of The Arrows’ is the kind of confident blockbuster that swaggers onto the screen, stays for a noisy, incident-filled two hours and gallops off into the night. Yet it doesn’t leave a Zorro-like swish on the memory, preferring to offer immediate gratification rather than linger beyond its duration. That said it offers the kind of slick, well-shot carnage that Korea has been exporting more than smart phones recently.

The real trick for film-makers aspiring to greatness is creating commercial movies that lodge themselves in the celluloid pantheon despite operating very much within an expected framework. ‘Raiders of The Lost Ark’, ‘The Dark Knight’, ‘The Host’, ‘Police Story’, these are examples of capturing lightning in a bottle. ‘The War of The Arrows’ simply doesn’t offer the kind of emotional engagement that lifts a film to these levels; it is a very efficient spectacle, a grand money-making juggernaut impossible not to admire, but hard to clasp to one’s bosom and cherish.

Though it may not inspire the soul, it does get the heart-pounding with several precisely orchestrated battle sequences. The eponymous arrows feature heavily and combat between Nam-Yi and the enemy are supremely shot and difficult to fault. There’s the usual duel at the end – given a fresh twist by involving archer v. archer – and a plethora of earlier set-pieces that utilise forests and rock crags. The market for traditional action films is somewhat saturated at present and so any little nuance that can add to the storyline is welcome. ‘The War of The Arrows’ is not a film that is about award-winning performances – all capable to be sure, though Moon Chae-Won is greatly underused – it is primarily a breathless martial arts epic and as such mostly satisfies.