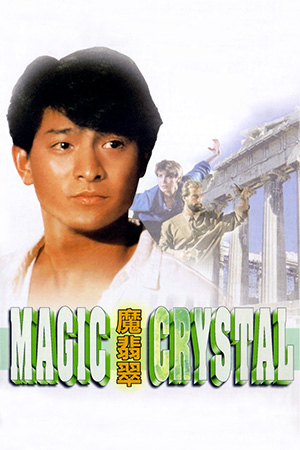 While in Greece, a noted archaeologist discovers an alien crystal with incredible powers. Such a discovery naturally alerts both the KGB and Interpol; the former, led by a skilled Russian martial artist (Norton) manage to kidnap the archaeologist, but not before the crystal is secretly passed onto a young Chinese school boy. Travelling back to Hong Kong with this highly-prized artefact, the young boy discovers that the crystal not only communicates with him, but also gives him special powers. These powers are a major asset against the school bullies and a crafty gambler (Chan) who wants to exploit him, but it also means that his life is put in danger. The boy’s father (Wong Jing) and good friend (Lau) are more than happy to protect him while also investigating the origins of the crystal and its wondrous qualities. Inevitably, both the KGB and Interpol catch up with them – the latter now become a useful ally for the heroes – and the ownership of the crystal is finally contested.

This is a ridiculous, convoluted film that happily gets sidetracked by comedy sequences rather than create any real tension for the viewers to savour. Thankfully, ‘Magic Crystal’ is also a great deal of fun; Wong Jing manages to restrain his usual vulgarity and blend together some genuinely amusing comic scenes with an enviable amount of superior fight choreography. The fact that it is fairly ludicrous is never an issue as director and cast make sure that the film never takes itself seriously. Wong Jing should be given some credit for this; although the comedy is broad and tends to dominate the storyline, it is still delivered with a pleasant good-natured quality and real sense of fun that Wong Jing didn’t always convey. Comparing it to Wong’s recent foray into science fiction, ‘The Wesley’s Mysterious File’, highlights exactly where ‘Magic Crystal’ succeeds and the 2002 production failed – despite a sci-fi theme that is rare in Hong Kong films, ‘Magic Crystal’ is still a product of the Jade Screen first and foremost. It doesn’t waste its energies trying to compete with Hollywood blockbusters and this proves to be a vital strength. Choreographer Leung Siu Hung also makes superb use of his cast, taking Andy Lau – by no means a real screen fighter – and making him look as physically adept as he’s ever looked. Rothrock and Norton also get to shine in their closing duel while regular Jing associate Natalis Chan fills in the comic gaps quite nicely.

‘Magic Crystal’ would no doubt be picked apart by some Western critics not used to the visual exuberance that made Hong Kong cinema so extraordinary. For the rest of us it’s a recommended action comedy that will make most of us feel a twinge of nostalgia for those golden years.