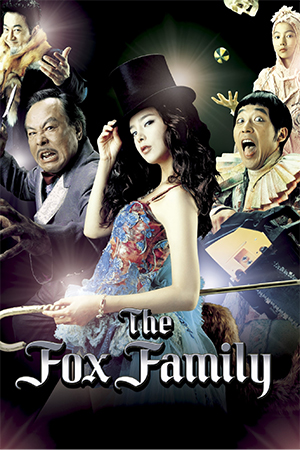 ‘The Fox Family’ pretty much has it all: comedy, romance, horror, musical numbers, people falling over a lot and, oh yeah, break dancing. A loony but infectious slice of Korean bubblegum cinema, ‘The Fox Family’ is a delirious, belly laugh romp with oodles of creativity and fun, and a bit of gore and blood thrown in just for good measure.

A family of Fox Spirits, or “Kumiho” as they are known in Korean folk legend, has taken human form. Travelling the country as a pretty inept and not very family friendly circus troupe, they plan to stay in human form forever. In order to do this, they must wait for an eclipse that occurs every one thousand years and then consume a human liver. Easier said than done. Having captured a group of real humans (and put them to work in the circus) to murder on the night of the eclipse, the family begin to experience human emotions such as love and realise killing them may not be as easy as first thought. Plus, they have to do a whole lot of singing and dancing in the meantime.

Unique in design and execution, ‘The Fox Family’ is a delight to look at, with slick photography and visually pleasing production design. The flick zips along at a hearty pace, stopping here, there and everywhere for all kinds of mad musical numbers. If musicals are not your thing, then ‘The Fox Family’ may irk but even the most cynical will find it hard not to raise a smile at all the silly singing and dancing. It’s all part of the movie’s charm and with a game cast that throw themselves into the comedy, it’s hard not too enjoy. Song and dance wise, the best musical set-piece has to be when the film pretty much stops for a group of riot police and rioters to have a break dance off in order to resolve their dispute. Brilliant.

This may all sound as mad as a bag of frogs and it pretty much is but ‘The Fox Family’ works thanks to tight and creative direction, loveable characters that we come to like despite all the zaniness and a truck load of laugh out load comedy moments. Now the comedy is played pretty broad and dips into black comedy more often than not but the filmmakers and cast put so much energy into the slapstick and humour it’s hard not too laugh along at all the absurdness. Highlights include an early disastrous attempt at a circus show; a ridiculous poem about the erotic-ness of eating noodles; a song and dance number taking in a construction site, a men’s sauna and many other obscure locations; and characters repeatedly falling over, something which is obviously funny the world over.

Under all the zaniness, singing and the odd bit of blood, ‘The Fox Family’ is actually quite a sweet modern fairytale. A bit like ‘The Addams Family’ but with more musical numbers, and a good dose of black comedy, ‘The Fox Family’ is thoroughly enjoyable and a creative dose of Korean comedy.