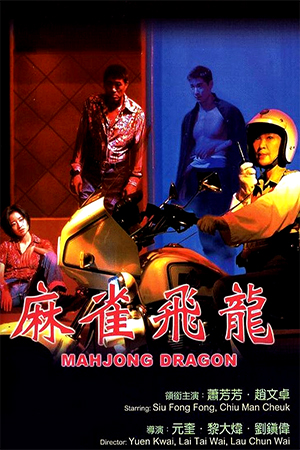 The directorial teaming of Yuen Kwai and David Lai managed to create a definite cult hit with ‘Saviour Of The Soul’. It combined a unique visual style with exciting action and goofy comedy – this proving to be a successful blend. The partnership then subjected audiences to a dreadful sequel before returning with this action comedy. ‘Mahjong Dragon’ seeks to combine the popular elements of the gambling film with the differing talents of Vincent Zhao and Joesphine Siao. The result is the ultimate ‘mixed bag’.

Mainland gambler ‘Quick Hands’ (Vincent Zhao) is well known for his gambling skills and his fighting ability. After completing a prison sentence for the murder of a vicious rival, Quick Hands seeks a way out of the cut-throat world of the triads. Unfortunately he has a new enemy on the scene who wants to make use of his powers and rule the underworld. Entering this world is a gambling-obsessed, debt-ridden policewoman (Siao) who has come to the Mainland looking for a husband. Seeing the opportunity to gain a vital passport, Quick Hands decides to apply for the position and therefore travels with his new wife to Hong Kong. His new wife is under no illusions as to his intentions, but agrees to get him a passport in exchange for his help on the gambling circuit. Their relationship is complicated when both acquire admirers; a local villager takes an interest in her and the villager’s niece takes a shine to him. Then there’s the small matter of Quick Hands’ nemesis who arrives in Hong Kong looking for the couple. Throw some young triad youths into the blend and all is set for a climax where all the loose ends are finally tied up.

It’s hard to think of a film that attempts to mix so many elements together, trying to please just about every potential viewer. Sadly this desire to attract every kind of audience means that it very rarely hits any of its targets properly. There’s the straight-forward gambling narrative, the comedic love story between Siao and Ko, the dramatic love story between Zhao and Lam, the redemption of the local triad youth and finally the typical revenge plot which culminates in the final fight between Zhao and Lo. With all of this in one film, it’s inevitable that none of the story’s threads are well enough developed to hold sustained interest. The comedy is obviously forced and often too heavy-handed to raise even the most sympathetic of smiles and the drama is awkwardly shoe-horned in by the directors. In fact Kwai and Lai appear to be pulling in very different directions in the making of this film; it’s hard to guess exactly which way the viewer is supposed to take this. The result of this indecision means that, even at just over 90 minutes, the course of ‘Mahjong Dragon’ runs far from smoothly.

Thankfully for fans of the stars, there are enough reasons to still watch this. It’s certainly an unremarkable effort, but Josephine Siao and Vincent Zhao are again a joy to watch – for very different reasons. Siao savours another comic performance along the same lines as her role in ‘Fong Sai Yuk’; she is again playing a character who elicits sympathy even though she’s on the edge of sanity. Zhao’s Jet Li-esque aptitude is highly entertaining to watch and electrifies the screen when given the chance. His closing battle against Ken Lo is easily the film’s main highlight and will please fans of Yuen Kwai’s exciting choreography.

‘Mahjong Dragon’ offers a widely inconsistent action fix. While it may never fully please anyone, such is its very confusing nature, it is still a fair diversion.