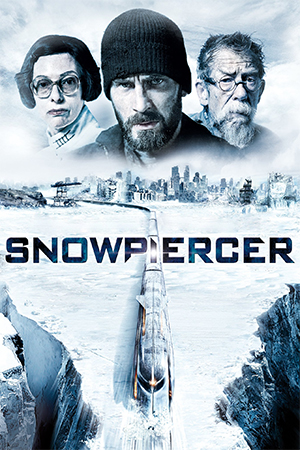 Bong Joon-Ho makes an incredibly confident and thrilling English language debut in ‘Snowpiercer’, which can sit comfortably alongside his already impressive filmography (‘Memories of Murder’, ‘The Host’, ‘Mother’) and showcases the Korean auteur at the top of his game. Based on the French graphic novel ‘Le Transperceneige’, the film is a future set tale where the earth is frozen over and deemed uninhabitable. Several thousand survivors cling to life aboard a constantly moving train that circles the globe, smashing through the ice, where they attempt to forge some kind of existence. Much like the outside world used to be, there is a class system in operation with the wealthy living the life of luxury in the forward carriages while the poor live out a life of misery in the tail section. With cramped conditions, little food and mysterious inventor and ruler of the train Wilford (Harris) snatching the children of the tail section for puzzling reasons, lowly Curtis (Evans) and his rag-tag of followers decide to put their plans of uprising into action and charge the length of the train determined to get to the front and make Wilford pay.

Fusing sci-fi, drama, political and societal comment, black comedy and action into a coherent and often breathless whole, ‘Snowpiercer’ (despite its cramp setting) is epic science fiction made for adults. Often oddball in its characters and execution, ‘Snowpiercer’ is nevertheless thought provoking and often thrilling delivering some breakneck spectacle alongside all its social comment and strange mix of characters.  It’s an often dark and downbeat tale as the group make their way through the ever-increasing strange carriages (nightclub carriage, vegetable garden carriage, pool carriage and even an underwater carriage!!) seeing the opulence of the other passengers thrust into their faces and having to face wave after wave of Wilford’s enforcers. The train acts a microcosm of life, running the whole spectrum of social order and class, and showing us that while the planet may be uninhabitable the human race still suffers its same foils despite depleted numbers and being crammed in a giant moving tin can.

While there is much allegory to be found (sometimes heavy handily so) in Bong Joon-Ho’s film, which much more serious critics will pick up on and analyse, his futuristic tale also works just as well as a thrill ride. Once the quest to traverse the train begins, the momentum of Curtis and his crew rarely lets up as they bulldoze their way through an eclectic mix of carriages and adversaries. Again, despite the cramp confines Bong Joon-Ho stages some thrilling set-pieces including an epic fight with balaclava wearing knife-wielding henchmen, a mad dash and fight in the dark and an incredibly thrilling chase and fight through the sauna (!) section of the train. While the action and spectacle never dominates proceedings, as character and story always takes precedence, Bong Joon-Ho has still crafted an impressive thrill ride.

However, the film has a somewhat wayward tone, which while it works, may not be to every viewers liking. There’s a thick thread of black humour running throughout (mainly courtesy of Tilda Swinton’s cartoon like character, complete with broad Northern English accent!) that may at first seem at odds with the serious nature of the narrative but works well thanks to Bong Joon-Ho’s assured hand. In fact, the black comedy gives the film it’s oddly unique quality which all adds to the experience (the scene taking place in an education/school themed carriage reaching a crescendo of lunacy, which is at once barmy and incredibly tense). While Tilda Swinton has received a lot of the kudos when it comes to the acting (and she certainly deserves it, even if her character does slip into pantomime villain on occasion) mention should also go to the likes of Jamie Bell and especially Chris Evans: his character revealing more and more layers the further he progresses through the train building to a truly disturbing speech about what his character had to do in order to survive in the tail section of the train. With a larger budget and international cast to play with (including The Host’s Song Kang-Ho and Ko Ah-Sung) Bong Joon-Ho crafts a superior sci-fi fable.

It does dip into pretension more than once and it’ll no doubt have as many people hating it as loving it but ‘Snowpiercer’ is truly unique sci-fi and an often exhilarating ride. See it.