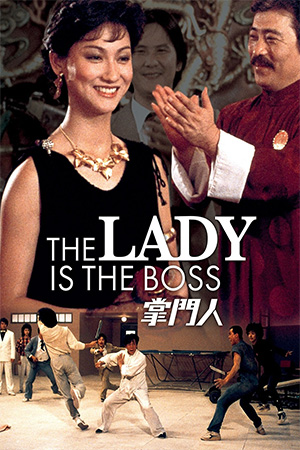 When a noted kung-fu school in Hong Kong announces plans to move to a new location, the founder’s eldest child is sent over from the U.S. to oversee the matter. Though the current teacher expects a traditional ancestor ready to honour the past, he is shocked when he meets a brash young woman who is desperate to drag the school into the 80s. Her modern ways are embraced by the young students whose eyes are opened up to the burgeoning youth culture in Hong Kong, but the older generation worries that the conservative ways of the past are being compromised. Yet when the school’s new patron angers a local mob boss, all of the grievances need to be put to one side to deal with the matter.

Often unfairly nudged aside when the career of kung-fu auteur Liu Chia-Liang is considered, ‘The Lady is the Boss’ is a fun action comedy that came near the end of the Shaw Brothers’ hegemony in Hong Kong. While it doesn’t compare to ‘The Pops’ most celebrated films – namely ‘The 36th Chamber of Shaolin’, ‘Eight Diagram Pole Fighter’ and ‘Dirty Ho’ – there’s much to savour here. In an age where the lightning quick modern day action rides of the 80s seem so very far away, ‘The Lady is the Boss’ is refreshing fare.

The main thing that has probably hindered the reputation of ‘The Lady is the Boss’ over the years is that it is a definite product of its time, full of odd 80s fashion and gimmicks. Seeing ‘Shaw Brothers’ most celebrated stars kicking and flipping through ninety minutes looking like the cast of ‘Fame’ is an undoubtedly bizarre sight. That said, and despite a plot which leaves so many questions unanswered, this is snappy little reversal of the superior ‘My Young Auntie’ where Hui Ying Hung played the very traditional Chinese heroine.

‘The Lady is the Boss’ comes alive during its numerous action set-pieces, but like all of the better genre films it saves the best for last. The lengthy fight scene in the gymnasium at the end is well worth waiting for and includes a few tongue-in-cheek pastiches of some of Liu Chia-Liang’s most endearing classics. While Golden Harvest were perfecting the modern day action comedy thanks to Jackie and Sammo, ‘The Lady is the Boss’ indicates that Shaw Brothers’ had a few aces up their sleeves before the end of the studio’s halcyon days.