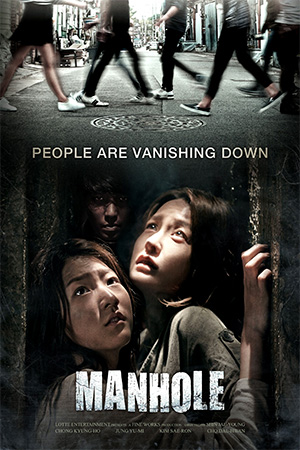 A spate of disappearances in Seoul seem to point to the work of a serial kidnapper, but the police struggle to find any trace of the missing persons who just vanish from quiet city streets. One of the parents of one of the victims is determined to find out what happened with or without the authorities’ help and starts to link events back to a series of innocuous looking manholes that may be concealing a fearsome crime.

Meanwhile Yeon-Soo, a young woman working in Seoul, is concerned when her younger sister Soo-Jung vanishes mid-telephone conversation and traces the moment back to her walking along a dimly-lit street nearby. Soo-Jung has been abducted by the disturbed individual responsible for these crimes in Seoul and she is dragged to his dingy lair in the sewers underneath. It now becomes a race against time for older sister to find younger before the psychopath adds soo-Jung to his ‘collection’ permanently.

It’s probably not worth the exertion to apply much logic to events in ‘Manhole’: how do the police keep over-looking the mysterious static that occurs seconds before each abduction?; how easy is it to set up a vast labyrinthine lair in the Seoul city sewer system? – the list goes on. The way to enjoy this film is to soak up the dark, dingy atmosphere that pervades each and every frame. Shin Jae-Young ensures that the initial threat is played out in a very unsettling setting, favouring the use of the sewer location for a good 80% of the film. Also, as this is an Asian film, who lives or dies has much more of an air of unpredictability than their Hollywood counterparts; Korea certainly doesn’t recognise the rules that mean insist that anyone under 16 is immediately safe from harm. This makes for a tense finale that lifts the brief sag the story takes in the middle.

‘Manhole’ also benefits from its two young heroines and the sisterly bond that is believably displayed. They are two sympathetic characters who don’t fit into the wise-cracking, sassy protagonist mold that U.S. popular culture seems to favour – a few witless cracks spouted by photogenic faces passes for strong and realistic characters these days apparently. It does seem that the focus is especially on the sisters, so much so that the kidnapper/killer is a weakly written villain. It would have been fine to have had a blank, zombie-like Jason Vorhees psychopath, but the attempt to give ‘Manhole’s chief antagonist a background story is something of an afterthought. Nevertheless, a flawed thriller it might be, but it still retains an ability to chill that is appreciated though not always present in the genre.