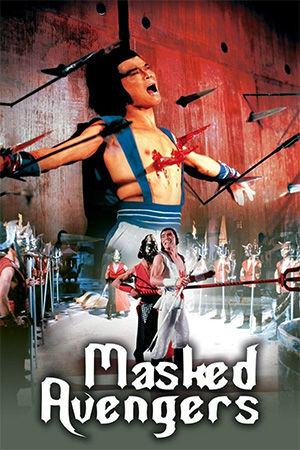 The fearsome actions of the Mask Gang – a group of highly trained killers who are terrorising the martial world – come to the attention of law enforcer Chi (Chiang Sheng) and his loyal team. When a badly injured man stumbles barely escapes the gang with his life, Chi decides to further his investigations. Using a slender lead, Chi and his best men travel to a nearby town to watch wealthy suspect Lin (Lu Feng) and see whether or not he is connected to the killers. As the investigation continues Chi’s men are attacked by the masked attackers while Lin seems to have no connections to the events. The only suspicious character proves to be the cook who eavesdrops the officers’ conversations and is never too far when the mysterious assassins strike. One of Chi’s assistants, Cheng (Chin Siu Ho), manages to befriend the cook after a great deal of effort and slowly learns of the hidden agendas. After one of the gold masks of the gang’s leadership is found in the cook’s belongings though, the law enforcers make him the number one suspect while Cheng sticks by his friend. Finally the divided loyalties are put to one side by the team as they finally discover the identities of the three chiefs of the Mask Gang. With weapons in hand, the avenging fighters find the Mask Gang’s secret headquarters and prepare for the final battle.

‘Masked Avengers’ is somewhat different from many of the other films in the Venoms canon. Firstly, it only features three of the five Venoms, which means that perennial Chang Cheh supporting players such as Wang Li and Chu Ker are given an opportunity to prove their worth. The characters are also slightly different to what viewers may be expecting from a Venoms film: Chiang Sheng is more like Kuo Chui in a serious role that features none of his usual mischief; Chin Siu Ho manages to be a hybrid of both Chiang Sheng’s and Lo Meng’s usual characters, combining boyish charm with a willingness to fight; Kuo Chui is again in a heroic role, but there is a more sinister side to him that is gradually developed making this quite a departure from the norm. These aforementioned changes do not make ‘Masked Avengers’ an unworthy effort though and there is much to admire in this baroque production. The cast were, by this time, so used to the appearing together that there is a unique familiarity to the proceedings. The three Venoms gel superbly when on screen together and when they do fight it is poetry in motion – a choreographic masterclass. Chin Siu Ho stands out among the newer stars with a performance that oozes confidence while his fighting abilities are equal to this.

All of the hard work of the cast cannot conceal the faults that they are powerless to prevent. The simple fact of the matter is that no film with only three of the Venoms can be considered among the very best, such is the need to linking each of the five together. Chu Ker, Wang Li and especially Chin Siu Ho are very good in their respective parts, but there’s always the constant desire to see Lo Meng and Sun Chien tear across the screen – something that nobody can compensate for. Strangely enough, Chang Cheh’s usual way of gripping the viewer from the very beginning of the narrative is lacking in ‘Masked Avengers’ as the opening twenty minutes are too patchy to fully absorb. Nonetheless, although this isn’t the best Venoms film, it certainly isn’t the worst and still features a hundred reasons why it should be recommended viewing.