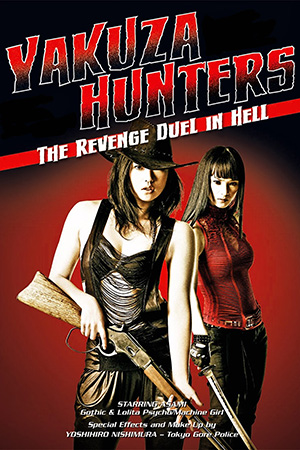 After three years of intensive training, Asami decides to return home to visit her master Inokuma – the man who originally taught her her Yakuza Hunting skills. Unfortunately, she soon discovers that the area has become overun by the Shoryu Yakuza and her master is a shambles. It appears that the Yakuza are planning to open up a casino so they have hired cold blooded killer Akira to wipe out anyone who gets in their way. At first, Asami minds her own business but when Akira brutally murders those close to her, she has no choice but to take up arms!

Despite sporting a similar story line to ‘The Ultimate Battle Royale’, ‘Yakuza Hunters: The Revenge Duel In Hell’ is clearly an attempt at making more of a serious action film. Gone are the 70’s style setting and scantily clad henchwomen, and in their place is a much more sombre revenge flick. Initially this switch in style is quite a letdown, as the script and actors aren’t really up to playing it straight and the modern backdrop only seems to highlight the film’s meagre budget. Luckily though, at about the halfway mark the film does establish its own identity, mainly thanks to some surprisingly dark violence and several very welcome nods to the spaghetti westerns of old.

The action in ‘The Revenge Duel In Hell’ also makes for a welcome addition and, while it may lack silliness, this is definitely one area that marks notable improvement over the original. Although still not intricate enough to make the combat truly great, it is clear that a lot more effort has gone into the choreography. This is particularly noticeable in a warehouse fight that sees Asami trying her best as she goes go toe-to-toe with several opponents. Of course it isn’t all positive though, as the ending opts to go down the CGI route with one of the worst looking finishing moves you will ever see.

‘Yakuza Hunters: The Revenge Duel In Hell’ is quite a different animal to the first movie, so much so that fans of the original’s campy goodness may well be somewhat disappointed. Stick with it though as it does actually turn out to be a pretty solid attempt at low budget action filmmaking.