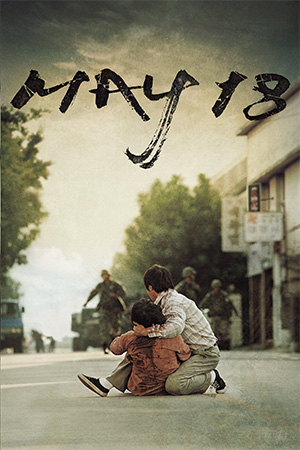 In the West, there seems to be a simple dichotomy when observing Korea: North bad, South good. The North is the foreboding wannabe nuclear power engaging in occasionally sabre-rattling, while the South is the financial powerhouse with a very Western outlook. Yet ‘May 18’ is a major Korean film that deals with one of the most notorious incidents in South Korea’s modern era, the tragic 1980 massacre of hundreds of civilians branded ‘rebels’ by the powers that be. The responsibility resting on the shoulders of Kim Ji-Hoon is immense – the condensing of an epoch-making event that has scarred the South for nearly thirty years into a two hour drama that attempts to capture at least a fragment of the utter horror.

Meek taxi driver Min-Woo (Kim Sang-Kyung) has only two distractions in life: the responsibility he has towards his ambitious younger brother Jin-Woo, a student in Gwangju college, and a growing love for the kind-hearted nurse Sin-Ae. Egged on by his best friend, Min-Woo decides to ask the love of his life on a date and, after considerable persuasion, manages to take her to the cinema. Trouble is brewing in the city though and the military has been sent in to quash apparent communist uprisings in the university campus. The ensuing chaos that explodes envelops the patrons of the cinema as the soldiers burst in to capture a dissident, forcing the audience out onto the streets. Min-Woo, Sin-Ae and Jin-Woo all witness the brutality meted out by the nervy soliders who unleash their confusion on protestors with a barrage of beatings. Gwangju is in turmoil with students and civilians all facing the wrath of the over-zealous military and struggling to find some refuge in the city.

Observing the devastation is Sin-Ae’s father Heong-Soo, a retired officer who now runs the taxi company that employs Min-Woo. The only form of defense for the Gwangju inhabitants now beseiged by tanks is to join a civilian militia started by Heong-Soo that breaks into a munitions storage to ready itself for an upcoming battle. Initially they manage to force the army to retreat and there is hope that the international press will be made aware of the Gwangju atrocity. The jubiliation turns to dread as Heong-Soo warns his makeshift regiment that, to cover up the incident, the regime will return to finish the job it had started.

Kim Ji-Hoon starts this epic production with a single scene that casts an ominous shadow over the next thirty minutes of ordinary Gwangju life: a platoon of troops are told that they are being sent out to fight the North, bundled onto a aeroplane, whipped up into a jingoistic frenzy and it is only then that one of the soldiers realises that the flight is heading south rather than the expected direction. This shocking moment is always at the front of our mind as ‘May 18’ settles into moments of mirth and mundanity that attempts to lull us into a false sense of security. Anyone with even a fleeting knowledge of this terrible episode in Korean history will unfortunately know exactly what the viewer is in store for.

There is a narrow margin between the dramatic and the operatic; ‘May 18’ leaps between the two areas like a dog on hot coals. Following the aforementioned opening scene, desperately tense and inauspicious as it is, comes a diverting introduction to all of the main characters and their uneventful lives. This, as is all too common with even the best Korean films, becomes zany to the point of annoyance and makes certain background players into caricatures rather than sympathetic persons. Not that the plight they quickly face is not powerful, but it does show a few cracks in Kim Ji-Hoon’s direction. Eventually moments of melodrama also overshadow the genuine sadness the incident naturally resonates, yet such a subject is fiendishly difficult to present without falling into this trap.

‘May 18’ is an imperfect production. Even in this state, it is an engrossing one. The performances range from the understated to the over-ripe, yet as a whole the cast provide the story with the needed pathos to remind us of the human cost behind the terror. Although ‘May 18’ cannot achieve the juxtaposition of everyday life and unimaginable dread as successfully as ‘Taegukgi’, when the reality of the Gwangju massacre begins it is impossible to ignore. Every moment between the civilians and the military balances on a knife-edge, exploding into chaos after the fuse is lit. These moments are exceptional in their execution and the director handles them with aplomb. They are upsetting and lodge in the mind long after the film has ended.

Though historical events tend to be notoriously difficult to translate to the screen and despite needless contrivances, ‘May 18’ is an unforgettable two hours that deserves many of the plaudits it has received. Some of Korea’s finest acting talent is available to remind international audiences of a tragedy that they may be unaware of or forgotten. It’s a though-provoking, highly recommended film.