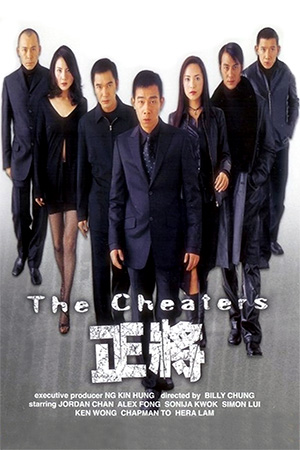 A group of five con-artists spend their time gaining the trust of various parties and then tricking them out of their money. In the opening exposition the group are seen in their chosen field with a fairly straightforward con on a keen gambler. The stakes of their dubious profession are raised when they hear of the return of legendary con-artist ‘King Of Ghosts’ and naturally want a part of his latest scam. With this in mind, the five infiltrate a lucrative business to observe the activities of ‘King Of Ghosts’ and also carry out their own huge money con. As they each begin to gather information on the holdings of the business and the enormous future potential it has, the trust that each has for the other begins to blur. This confusion reaches its height when one of the team is killed and the others may well be next on the list.

‘The Cheaters’ is a film with an intriguing premise that could have spawned a fine thriller. Unfortunately for the prospective viewer, the film never reaches beyond the interest of the synopsis and ends a somewhat dull piece entertainment. The storyline is never as clear as it needs to be with incidents and events badly pencilled in. Another thing that soon loses any interest in ‘The Cheaters’ is the unsympathetic characters that quickly become uninteresting to watch. The usual inner-conflicts and ‘after this job we’ll go straight’ motives are presented with the expected effect i.e. a definite lack of the spark it needs. After the hour mark, the narrative does begin to create some interest with the subsequent twists and double-crosses finally making the film watchable. Sadly though, this too is badly used with an ending that is very much a damp squib in comparison to what it should have been. Director Billy Chung also decides to replace real emotion and characterisation within the film with the tired slow-motion Wong Kar-Wai effects becoming more important. Never is this more apparent than when a character dies; the expected emotional effects on the others is absent, leaving no power in the twists and turns of the storyline. The one thing that is in ‘The Cheaters’ favour is the very short running time that means it is soon over. However, even at 80 minutes long, this film tends to drag.