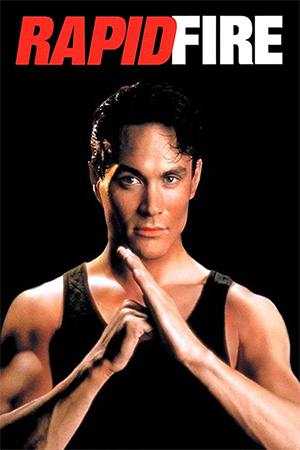 When Brandon Lee was chosen to play the lead in a martial arts flick, it was always obvious that it would be marketed with more than a passing nod to his heritage. However, ‘Rapid Fire’ isn’t really anything like a Bruce Lee movie and it actually owes more to the current crop of American action B-movies than anything else.  With the likes of Van Damme, Seagal and Snipes going down a storm at the box office, it’s clear that director Dwight H. Little was attempting to craft out a very 80’s style actioner.

Jake Lo (Lee) is a Chinese-American student who has been left traumatised after his father is killed in the Tianamen square massacre.  When he is roped into a protest he accidentally witnesses a murder performed by gang boss Antonio Serrano (Mancuso) and is taken into custody by the FBI to act as a witness.  The mob have other plans however, and with the assistance of a few inside men they attempt to take Lo out before he gets to testify.  What they didn’t bank on was Jake’s ability in the martial arts and he escapes only to become a wanted man by both sides of the law.  Seemingly alone with no one to turn to, Lo is discovered by undercover police officer Mace Ryan (Boothe) and is perceived as a window of opportunity with which to infiltrate the underworld.  Perhaps with his fighting skills and the long arm of the law behind him Jake can take out the entire gang, but nothing is ever that simple.

In terms of plot, ‘Rapid Fire’ certainly has its roots firmly planted in Hollywood. The majority of the what the film has to offer consists of a number of standard genre clichés, and the whole “superhuman hero beats bad guys” is fun but extremely predictable. The film also seems to noticeably struggle when it comes to crafting out relationships, and the pseudo father-son bonding between Lee and Boothe just gets plain awkward towards the end. Luckily though, Brandon Lee certainly makes for a very appealing leading man and he really nails the part of a fast-talking tough guy. Powers Boothe is also another bonus and despite having to deliver some rather hammy dialogue, sparks up a decent chemistry with Lee.

The action in ‘Rapid Fire’ clearly has a very obvious Hong Kong influence. Presumably this was down to Lee’s input as the film sports a number of Wing Chun styled fight scenes along with some nods to the works of Jackie Chan. The final fight in particular, which sees Lee up against bit-part player extraordinaire Al Leong, has a very Asian flavour and contains some really well-handled kicks and weapon work. Of course, this being an American made martial arts movie it does still lack the the polish that we have come to expect from the Far East. This is particularly aggravating when it comes to the camera angles as it is often unforgivably easy to see when the hits don’t actually make contact.

‘Rapid Fire’ is a pretty entertaining action movie, mainly thanks to Lee’s performance and some solidly handled fight scenes. If you’re okay with a bit of predictability and some cheesy dialogue then this is definitely well worth a watch.