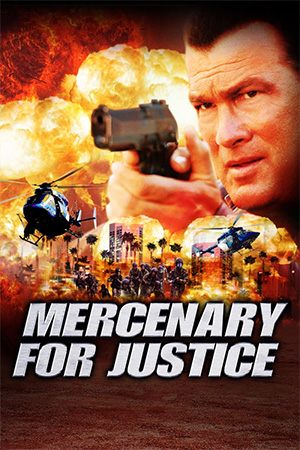 Mercenary John Seeger (Steven Seagal) and his crew are hired by CIA dirty deeds man John Dresham (Luke Goss) and black ops organiser Anthony Chapel (Roger Guenveur Smith) to complete an aid mission in South Africa. During the operation, one of Seeger’s men is killed and the presence of Maxine Barnol (Jacqueline Lord), a spy posing as a journalist, suggests CIA involvement. After returning to the United States, Seeger gets confirmation of Chapel and Dresham’s underhanded dealings but before he can act they kidnap the family of his dead friend. The only way he will ever get to see them alive again is if he is willing to assist in breaking the son of a prominent gun runner out of prison. As the clock starts ticking, will Seeger be willing to sacrifice his principals to save the lives of those he cares about?

Shot on a modest but workable budget, ‘Mercenary For Justice’ could easily have been a fairly straightforward, if somewhat silly action B-movie. Despite the basic sounding premise though, the film seems determined to over-complicate matters from the off. The entire opening segment, which should have been our kick-ass introduction to Seagal’s mercenary, is totally wasted on a convoluted setup to the so-called master plan. After about 10 minutes of mind-numbing exposition, Seagal finally waddles into view and we’re introduced to a number of other side characters, all of whom ultimately prove to be quite irrelevant. And just when you think that the story is actually progressing, the film suddenly transforms into a revenge movie… no, a heist flick… or is it a prison break movie? Who knows, because clearly the filmmakers had no clue what they were trying to do. Instead, they just throw out multiple plot threads, hoping that one of them eventually leads somewhere. Spoiler: they don’t, and all we are left with is a baffling and often downright boring hour and a half.

The film’s lack of a coherent plot is only made all the worse by the quality of the script. Every line feels like it was lifted from the “how to make an action movie” manual, and it’s absolutely overflowing with terrible clichés and attempted one-liners. Acting is also a big issue, even by B-movie standards, and it seems as though there are some strange shenanigans going on here. While there’s no question that Seagal’s performance isn’t very good (and that’s being kind), there are some issues with when and why he appears. According to online sources, this was down to a number of disagreements between several people involved in the production. Presumably Seagal was one the main offenders, as he is often bizarrely shot in singles or close-up and some of his lines are blatantly dubbed. As for the supporting cast, most of them are left with little more than stereotypical roles to fill (the love interest, the sidekick, the villain, etc.) but some of their efforts are still inexcusable.

And so, that leaves just the action scenes to hopefully save the day. Before I go any further though, it’s worth pointing out that this is not a martial arts flick so don’t go in expecting a Seagal slapfest. That said, there are still a couple of one-on-one moments although you could very easily blink and miss them entirely. The first one takes place in a bathroom and it’s literally just Seagal throwing a guy around for a few seconds before he eventually breaks his neck. The other vague attempt at a fight appears during the finale and it should have been the big confrontation with one of the villains. Sadly though, it winds up being another easy win for Seagal as he quickly dispatches of his opponent. The remainder of what the film has to offer is mainly shootouts, and they’re actually better handled than you might expect. There’s some decent weaponry on display, some solid explosions, and impressive vehicle stunts, but unfortunately a lot of it is undone by the way it is shot. We either have to view them through a shaky, motion-sickness inducing haze or endure even more camera cuts than a scene from ‘Taken 3’.

‘Mercenary For Justice’ is another straight-to-DVD (if that’s even still a thing anymore) Steven Seagal outing that is probably best left sitting on the shelf. Despite a few hints of quality from the action/stunt team, the film is a shambolically constructed mess that is rarely fun to watch.