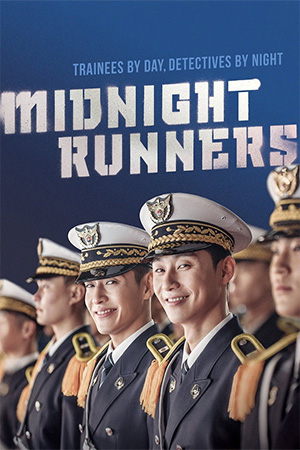 That old genre of the buddy copy film, so skilfully handled by American cinema in the 70s and 80s with films like ’48 Hours’, ‘Beverly Hills Cop’ and my own favourite ‘Running Scared’, has had a partial renaissance of late. Yet the wit and spirit of those halcyon days as long since gone and we are left with tripe like ‘The Heat’. Thankfully there is a recall to better times with Kim Joo-Hwan’s massively enjoyable ‘Midnight Runners’.

Ki-Joon and Hee-Yeol are two new recruits at Korea’s Police University from very different backgrounds; Ki-Joon comes from a poor family and sees the free tuition as a way out of poverty while Hee-Yeol wants to steer away from the path chosen for him by others. Though they initially clash, the two become friends and spend the next two years supporting each other through the course. A chance to put their teaching into practice comes when the pair go to Gangnam one night and witness a kidnapping. After the city police force take too long to respond, Ki-Joon and Hee-Yeol resolve the save the victim themselves, a decision that brings them into conflict with Seoul’s murky underworld.

What made a film like ‘Lethal Weapon’ so entertaining was the ability to weave humour into a well conceived storyline and ensure the characters had a touch of realism to them. The villains in films like ‘Beverly Hills Cop’ and ‘Red Heat’ and many others were never pantomimic, never just their to be some idiotic patsy to joke-cracking imbeciles. This meant that humour was organic and didn’t detract from the storyline. ‘Midnight Runners’ is an excellent example of how this is achieved: take two likeable characters, give them a touch of heroism and set them off against a dastardly antagonist.

Despite the fact that the main plot doesn’t start until a good twenty minutes of elapsed, the journey there is certainly not arduous. A good portion of time is wisely spent on establishing the chemistry between the two leads, meaning that, when they do get thrown into the madness, we are already rooting for them. And director Kim Joo-Hwan doesn’t shy away from pitting the heroes against some especially nasty villains and putting them in a few very tension-filled situations.

Fresh, funny, exciting and full of snappy action, ‘Midnight Runners’ is a joyous ride, rarely missing a beat from first frame until last. Such an achievement shouldn’t be underestimated; much more exalted films could learn a few things from the pacing and characterisation on offer here. A sequel would be most welcome.