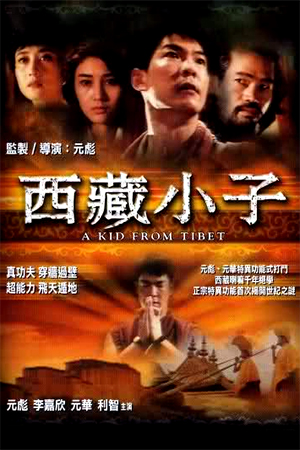 Yuen Biao directed this excellent mixture of fantasy and modern day action and also takes the title role. He plays a young Buddhist monk who is given the task of bringing back a holy artefact to Tibet. This relic, however, is in the possession of a particularly unpleasant villain who is hoping to combine it with a similar treasure to become all powerful. To aid (or hinder) him, Biao is guided through the urban jungle by a beautiful, but narrow-minded executive (Li) who takes an almost immediate aversion to him when they meet in Tibet. Also eager to meet the young monk is a power-hungry nemesis and his sister (Wah and Li-Chi respectively) whose female charms are a useful weapon against the innocent hero. It’s not long before the two rivals are ready to engage in the final battle and see who will really own these mysterious relics.

One of the great screen rivalries returns with another clash between Yuen Biao and Yuen Wah after their encounters in such classics as ‘Eastern Condors’ and ‘Iceman Cometh’. As is continually the case, their confrontation is well-choreographed and always exciting. Yuen Biao plays the well-loved Hong Kong character of the ‘innocent hero’ with fine comic timing and is superbly supported by damsel in distress Michelle Li and femme fatale Nina Li-Chi. The location filming in Tibet really gives the film a fresh look and even when the narrative switches to the well-worn streets of Hong Kong, the film retains its appeal. Without a doubt, ‘A Kid From Tibet’ is a hugely enjoyable action comedy that is the perfect showcase for the multi-talented Yuen Biao.