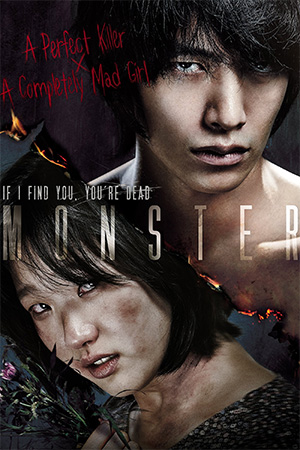 Bok-Soon (Kim Go-Eun) is a somewhat simple but very outspoken country girl who lives a happy life with her younger sister, Eun-Jung. One night as the pair are settling down for dinner, they find a young girl on their doorstep who is unable to speak. After an evening spent caring for the girl, the group set out to try and track down her parents. As they are walking through the woods, the girls are confronted by a cold-blooded killer called Tae-Soo (Lee Min-Ki) who kills Eun-Jung without a second thought. Although she manages to escape with her life, Bok-Soon is heartbroken and vows to get revenge.

‘Monster’ is billed as a Korean revenge thriller but it is perhaps not quite the film you may be anticipating. While technically there is a person/s looking to get vengeance for a wrongdoing, the overall execution is far less exciting. For starters, no one ever really seems to know what they’re doing. While we understand that the two girls are supposed to be naive, their decision making is simply ridiculous. They bumble around comically for days with constant distractions, meaning the film quickly loses both pace and any hope of tension. Meanwhile, the killer is equally embroiled in other pointless activities and it seems as though his rather bizarre obsession with the little girl only seems to re-emerge when it is needed to further the plot. As for the other characters in this world, they seem to fall into one of two categories; incredibly stupid or incredibly obnoxious. It seems as though there is no in-between and you’ll constantly find yourself either pulling your hair out in frustration or shaking your head in utter dismay.

Performances from the cast are equally hit and miss. Kim Go-Eun plays your typically headstrong and brash Korean leading lady, who is often so high-pitched that only dogs can understand her. This is really not her fault however, as it appears to be what the role calls for but that certainly doesn’t make it any less annoying. Her most touching moments come when she is bonding with Ahn Seo-Hyun, but even these scenes are somewhat spoilt by the constant shouting and name-calling. Lee Min-Ki on the other hand is extremely promising, even if his looks do make him appear a touch too popstar-ish to fully convince. He is suitably creepy and threatening whenever he is on screen and it is him alone that helps the film retain a small amount of atmosphere amongst all the silliness.

As it is primarily a thriller, ‘Monster’ doesn’t contain a great deal of action but the little we do get is pretty sloppily handled. Shaky cam is the main order of the day and this is made all the more aggravating by the director’s constant need to change the camera angle every few seconds. Lee Min-Ki also never truly convinces as a “professional” killer. This is by no means the actors fault either, it’s more down to his fighting style which seems to be very inconsistent and he bizarrely struggles against a variety of weaker opponents. It’s also worth pointing out that there’s quite a bit of violence towards women that often seems fairly unnecessary. You can understand it being employed to demonstrate how evil someone is, but everyone in this world seems happy to raise a hand and no one has an ounce of human kindness.

‘Monster’ has a few elements that could make for a decent thriller, but the overall picture is sadly spoiled by a number of idiotic characters making even more idiotic decisions. If you’re a more tolerant viewer who is capable of blocking this out, then perhaps you’ll find it more rewarding than I did.