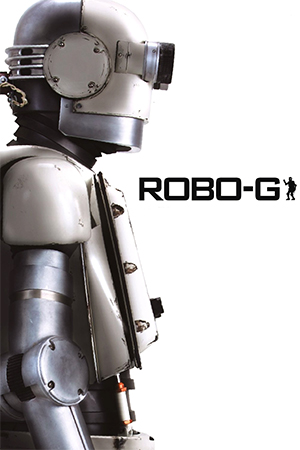 Elderly widower Suzuki (Curtis) sees his life drift into mundane routine with little to break the monotony; even his grandchildren have little interest in spending time with him. After seeing and advert for an actor needed who fits very specific measurements, Suzuki decides to try out for the mysterious role and attends an audition held by three decidedly odd boffins.

Although he ultimately proves successful he has little idea as to what the performance requires until he is taken to a scientific exhibition, clad in metal and asked to pretend to be a company’s revolutionary new robot. Reluctant at first, Suzuki quickly gets into his role and befriends the three inventors who have manufactured the masquerade just to keep their jobs. Yet the appearance sparks a national frenzy and Suzuki finds a new life as the man inside ‘Robo-G’, travelling the nation with the creative trio, ensuring the public never discovers the truth behind this incredible celebrity.

After the very pleasant yet underwhelming ‘Happy Flight’, Japanese comedy auteur Shinbou Yaguchi returns with ‘Robo-G’, a film that gives the director more scope for his mixture of subtle, surreal and slapstick humour. Utilising a premise that is tailor-made for technology-mad Japanese audiences, Yaguchi achieves a partial return to the superlative form of yesteryear.

As is often the case with Yaguchi’s films, the intriguing concept is intended as a gentle framework for the real theme, that of acceptance or appreciation. In ‘Swing Girls’ there were students finding purpose in the unlikely world of big brass music and in ‘Robo-G’ it is the rejuvenation of an elderly man thrown on the social scrapheap. Mickey Curtis is superb as said man, a character who is fiercely independent yet desperately lonely and eager to reconnect with his grandchildren. The subtext is an Ozu-esque dig at the disintegration of the Japanese family and the vast gulf between the generation who came through the war and their subsequent offspring. Yaguchi has a comical take on this modern dilemma, but as always invests the storyline with a genuine pathos that is never less than beguiling.

Having praised its ingenuity, it must be admitted that the material is rather thinly spread out over the two hours meaning that there is a noticeable lull 45 minutes in. Things pick up with gusto near the finale, but the uneven rhythm of the film means that the whole product is subtly affected. ‘Robo-G’ is still a worthy addition to the Yaguchi canon though and offers heartfelt laughs with tender introspection. And it’s worth the price of purchase just for Mickey Curtis’ rendition of ‘Mr. Roboto’ during the end credits!