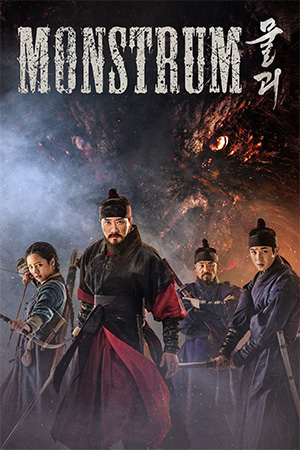 16th Century Korea and a fair king finds his throne in jeopardy when rumours spread that he can’t protect his kingdom. With tales of a giant monster terrorising the land, the king puts together a small task force to hunt down said beast. Led by a pair of renowned warrior brothers (Myung-Min Kim, Kim In-Kwon), who are forced out of a quiet retirement, the motley crew set off into the dangerous forest lands not only in search of the beast but also hunted by those who want to dethrone the king.

Good looking, slickly made, period-set monster action, ‘Monstrum’ lives up to its title, concept and cover art and delivers some rollicking giant creature action. Said monster, that some believe is just a myth to make the king doubt his control over his realm, turns out to be well and truly real (no spoiler here, the film makes no bones about the creature being front and centre!), and when the various factions’ cross paths with the monster (and inevitably piss it off!), great gory giant creature action erupts. ‘Monstrum’ also makes no bones about being a whole heap of fun and once the group of would-be heroes happen upon the beast the film delivers impressive set-piece after set-piece. The CGI used to create the big beast doesn’t always hold up but the great creature design and the way it’s incorporated into the action scenes makes up for any flaws in the rendering. Huh Jong-Ho and Jung Sung-Ho orchestrate some impressive action, that’s surprisingly tense and inventive and they even manage to squeeze in a couple of sweet swordplay action scenes.

It does take a good 45 minutes for the big beast to make an appearance, so some make get itchy waiting for it to appear, but this allows for some nifty political intrigue and for us to get to know the likable brothers and their adopted daughter/niece (who also tags along for the ride) and builds the tension nicely as we wait for the monster to appear. Once the flick switches to action, the monster mayhem rarely lets up and its fun seeing a giant creature rip through the Joseon era decimating its human inhabitants.

Great, gory fun that doesn’t take itself too seriously but is well made, offers oodles of ace action and has one impressively mean beastie.