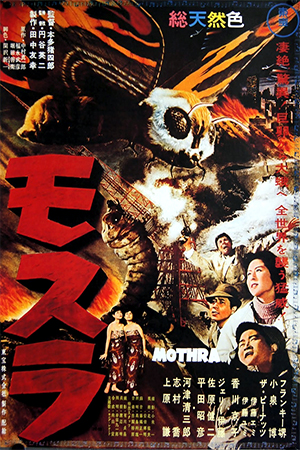 When shipwreck survivors are found free of radiation on Beiru, an island previously used for atomic tests, they claim they were protected by a special juice given to them by the natives. After hearing the news, a group of Rolithican and Japanese scientists mount an expedition to the island where they discover two women only a foot high. The group’s dastardly leader, Clark Nelson decides to abduct the women and puts them on display in a vaudeville show. However, their sweet songs actually contain a cry for help to Mothra, the gigantic moth worshipped as a goddess by the island people. Now Tokyo will have to prepare itself as Mothra is coming to get her people back, and she won’t be taking any prisoners!

Much like ‘Godzilla’ and ‘Rodan’, ‘Mothra’ is considered by many Kaiju fans to be one of the true classics of the genre. Unlike the aforementioned outings though, this particular entry is actually less about all-out monster mayhem and more about the evils of mankind.  In many ways, it shares a number of similarities with ‘King Kong’, as the evil antagonist looks to exploit his discovery for his own gain and the sympathetic focus is clearly shifted more towards the innocent island folk. In keeping with this, Mothra only goes on the offensive after her people are threatened and when she finally chooses to wage war on the army the audience is left cheering rather than screaming.

Interestingly, Ishiro Honda also opts to keep the mood of the overall production a lot lighter than his previous works. Gone is the sinister and dark colour scheme of ‘Godzilla’ and now everything is much bolder and brighter, giving the whole film an almost happy-go-lucky feeling that is incredibly infectious. Similarly, the main characters don’t seem to be quite so concerned about the whole affair, occasionally finding the time to appreciate a musical number or two and even participating in a few comical exchanges right in the thick of the chaos.

Don’t worry though, because ‘Mothra’ still contains the usual quota of mindless destruction. When that giant moth gets mad, there is certainly no stopping her and the ingenious ways in which she destroys buildings and vehicles is immensely fun. Once again, it is the genius of Eiji Tsuburaya that is behind the special effects and both the creature and the miniature sets are all incredibly well crafted with a large amount of detail. Admittedly, some people may well find a few of the effects a little hokey by today’s CGI standards, but in my eyes there really is no substitute for good old fashioned modelling.

While it may lack the tension of some of the other Kaiju films, ‘Mothra’ makes for a very refreshing entry into the genre that provides more of a sense of fun than ferocity. If you thought that these movies were just about evil, rampaging beasts then think again because this one will have you caring more about one foot women and a giant moth than you could have possibly imagined.