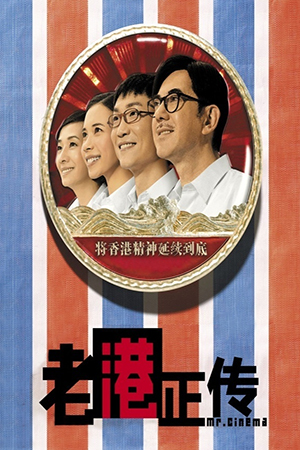 Hong Kong a seen a few productions appear throughout 2007 to mark the tenth anniversary of the Handover and Samson Chiu, a director whose previous acclaimed works have often had a strong vein of nostalgia running throughout, was not surprisingly among the film-makers keen to put the modern history of Hong Kong into a cinematic context.

Patriotic communist Kong (Wong) longs to be with the loyal Mainland proletariat, but scrapes together a living in the vibrant capitalist melting pot of Hong Kong. Working as a projectionist at a popular cinema, Kong mixes mainstream fables with propaganda-driven polemics about the ‘Motherland’ and finds his equally staunch comrades keen to offer their support. Yet Hong Kong is changing and Kong’s wife and young son are less than enthusiastic about his ambitions to relocate to Beijing. As his son, Chong (Cheng), grows up he begins to resist his father’s subtle indoctrination and yearns for the trappings of the capitalist society around. Chong’s relationship with Kong may be on the wane, but his friendship with his life-long next door neighbour (Mok) is developing into something more profound though her impending studies in the U.S. threaten to end this love before its even started.

Samson Chiu recalls the ambitions of his successful ‘Golden Chicken’ series with this attempt to consolidate forty of Hong Kong’s most tempestuous years into a two hour production. Such a lofty target is quite within the capabilities of a film-maker like Chiu who has shown himself adept at conveying complex themes and time-scales on the cinema screen before. With ‘Mr. Cinema’ though, Samson Chiu is unable to handle the considerable task of weaving together a retrospective of Hong Kong’s modern history with that of a local family going through the eventful times. The resulting failure proves to be far more effective as a kitchen-sink drama than it does an enlightening look at the years that shaped the region.

‘Mr. Cinema’ starts firmly rooted in 1960s Hong Kong and the development of its own economic and social identity. Yet significant moments from this era, namely the left-wing riots of 1967, are alluded to (with Anthony Wong partially involved in them) but never explored to any great extent. Considering the creation of the central father-son dynamic is based on their contrasting pro-communist/pro-capitalist ideologies, this is a major oversight. The story then leaps from this under-developed era to the 80s and the adult Chong’s changing mindset though the director interjects every few scenes when he crow-bars another lazy reference to the times into the storyline. Ultimately what should be a film infused with the effects of the world around the main characters becomes a drama that is awkwardly stranded in a primitive history lesson. The recent ‘Hooked On You’ was set in a shorter block of Hong Kong history and had much simpler objectives, but it had enough attention to the detail of the era to make it a more rewarding paean to its beloved home.

Sifting through the disappointments of what was heralded as Hong Kong’s ‘Cinema Paradiso’, it soon becomes apparent as to where the production’s strength lies. Anthony Wong as the stern patriarch is excellent and it is his family life, away from Chiu’s delusions of grandeur, that brings the film its notable attributes. Kong is a deluded yet sympathetic father who finds it easier to articulate his love of the Motherland than that his has towards his wife and son. Samson Chiu uses the fluctuating fortunes of Kong and his son as a heavy-handed though strangely fruitful allegory for China’s sometimes difficult communication with its own off-spring; we see parental China ignored by dollar-grabbing Hong Kong and rebellious Taiwan and then we see the prodigals return to the warm bosom of their mother. All of this leads to much pro-Chinese posturing, but the family drama is well acted and full of powerful moments. It is here that the Samson Chiu of ‘Yesterme, Yesteryou, Yestersday’ emerges and gives evidence as to where his visionary skills lie. Tender moments with Ronald Cheng and Karen Mok (the former improves as the narrative progresses) are juxtaposed with scenes of regret and melancholy between Anthony Wong and Teresa Mo – the two outstanding performers in this work. When Chiu’s focus is scaled down and the camera allows such situations to take centre stage, ‘Mr.Cinema’ becomes a very rewarding effort.

As a grand statement on a rich period of modern history, ‘Mr. Cinema’ falls well short, but as a drama – and a piece of pro-China rhetoric it manages to achieve its objectives. The former has been mentioned yet its worth mentioning just how jaundiced its sentiments are throughout certain dubious allusions to history. For Anthony Wong’s character, China is a glistening utopia that firmly opposes the materialism of Hong Kong: for the viewer its almost as if Samson Chiu is trying to get them to be enchanted in the same way. Events like the Tiananmen Square Massacre are conveniently forgotten while the recent resurgence of China as a superpower is treated with reverential awe. ‘Mr. Cinema’ struggles to show events with an impartial eye and therefore drowns its intentions in a shower of blundering propaganda. Samson Chiu’s magnum opus is therefore hamstrung and operates best as a stand-alone drama; if the more ambitious nature of the production can be ignored and the awkward jingoism put to one side, ‘Mr. Cinema’ can be enjoyed as a well-performed, sometimes captivating film.