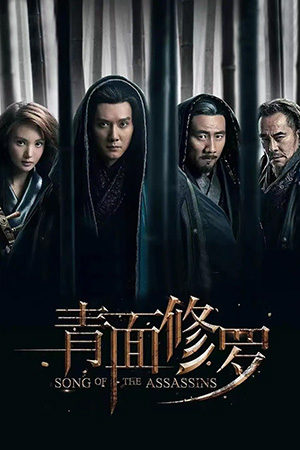 Young swordsman Qi Jun Yuan graduates from a prestigious, but secretive clan that carries out assassinations for various clients. Yet Qi, as skilled as he is, does not have the same cold-blooded streak as his contemporaries and fails to complete his first assignment. This means that he now becomes the hunted, evading numerous parties as he lives life as a fugitive. Meanwhile, there is a storm brewing in the martial world as rival schools fight for supremacy and a conspiracy threatens to destabilise the whole country.

You can often rely on Daniel Lee to produce a visually appealing production, one that gives plenty for the viewer to gaze in amazement at. Unfortunately, said films have not always been especially engaging; going as far back as ‘What Price Survival?’, Lee has often favoured style over substance. While ‘Song of the Assassins’ doesn’t completely rectify this tendency, it has to be noted that it is not only beautiful to look at but also an enjoyable watch, a feast for eyes and mind. Its inherent complexities and the cycle of double and triple-crosses that occur in the last quarter undermine some of the good work of the previous hour and a half, yet there’s enough quality throughout to make this forgivable.

One immediate positive is the use of older screen stars like Norman Chui (who worked with Lee on the aforementioned ‘What Price Survival?’), Kenneth Tsang and Ray Liu add that measure of gravitas to the story. They are well contrasted with a young, photogenic cast (especially the absurdly beautiful Gina Chen) who acquit themselves equally well with the material. And the source material, the novel by Yuan Tai Chi, peoples the byzantine story with a fascinating collection of weird and wonderful characters, something that always helps the enjoyment of a good wuxia.

Another fact that should be noted is the action which is some way above the current average. The complexity and quirks of the different characters makes this almost like a Chinese version of a Marvel superhero movie, but the action is often much crisper and less prone to needless quick edits. The quality increases as the film progresses and the viewer is more invested in the characters, meaning that it stands out as one of the more exciting swordplay films of recent years.

Unfortunately, a few deficiencies creep in, perhaps a sign that Daniel Lee still cannot quite restrain his tendencies. The whole computer-generated close-up of each steam-punk weapon working is initially superfluous, later annoying. Just because these things can be shown today, seeing how the internal mechanism of a weapon works quickly outstays its welcome. The previously highlighted twists and turns do, also, dissipate the tension in the last section and it makes the viewer distrust nearly every character and motivation that was built early; almost every character seems to have a cackling ‘But still…” kung-fu villain reveal and it’s hard not to roll your eyes by the end. The outfits and set design, while mostly excellent, also reveal some unusual choices; one clan is fitted out in those long, wax-covered Barbour trench coats that you expect to see people wear if you ever go grouse shooting. Despite all of this, it just about deserves to achieve the lofty heights of four stars and a solid recommendation.