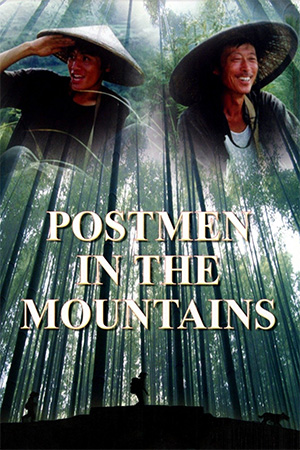 In the mountains of Southern China, an aging postman is ready to relinquish his arduous round and hand over the duties to his son. Initially the son is determined to travel on his own, but the father insists on joining him for one last delivery and show him the proper route to take. The draining three day journey begins with the father and son barely speaking and their strained relations over the years are very obvious. With the father insisting that his son listens to him and not try to cut corners on the job, the pair seem ill-suited for the long days ahead. Nevertheless, they gradually begin to understand each others viewpoints as the son is introduced to the characters along the way. The different villagers who takes these postmen to their hearts make the job much more than it seems and, by the end, the relationship between father and son is stronger than before.

As with the superb ‘King Of Masks’ this is another fine Mainland film focusing on relationships. The difference in ‘Postmen In The Mountains’ is that this relationship is between a father and son rather than an adopted version of it. Once again though, it is the subtlety that binds the film that really makes this so appealing. The story of an estranged father and son has been done countless times, but here the effects actually reach the heart. The direction by Huo Jianqi allows the viewers to see the characters with their qualities and faults as their bond develops. Meanwhile the viewer also gets to see some breath-taking scenery of China; it becomes a significant part of the narrative by the end of the story.

‘Postmen In The Mountains’ is full of charming and touching episodes that occur on the travels of the two leads. It is these incidental characters who flesh out the story and help outline the father’s and son’s personalities. This is expertly achieved by the excellent cast; the two main actors are thoroughly engaging while being nicely understated and the supporting players add another layer of quality to the production. Though this isn’t up to the lofty heights of ‘King Of Masks’ and lacks its overall resonance, ‘Postmen In The Mountains’ is a refreshing change of pace from the usual big-budget flicks. Another must-see film.