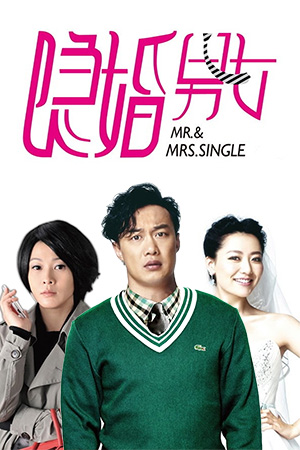 Cui (Chan) is stuck in a rut as he struggles to make ends meet and finds his wife becoming ever more demanding of material security. Although resolutely nerdish he manages to get a job at a top Chinese perfumer as an assistant to the bolshy CEO Mandy (Liu) and sees his wage vastly increase overnight. The only catch is that his boss will only employee single people due to her own tortured past, leaving Cui with not option but to dispense with the wedding ring and be at his company’s beck and call. Things are complicated when Mandy’s demeanour thaws and she begins to look to him as a friend while his wife – who works in the same office block – starts to investigate his odd behaviour.

‘Mr & Mrs Single’ starts as so many Asian rom-coms today do: a gaggle of beautiful women draped in designer labels obsessing over money and men (and the two are of course completely entwined). With all the depth of a lachrymose crocodile they manage to do their gender the kind of significant disservice that we men usually rely on a doped-up, flatulent and whiney Seth Rogan for (or one of his many clones). Yet ‘Mr & Mrs Single’ magically transforms into a work of well written wit and tender drama, grasping victory from the jaws of defeat.

The fact that this film is based on a popular Chinese play perhaps explain its slightly loftier intentions, but credit must go to director Patrick Kong for helping the words make a smooth transition from stage to screen. Kong has devoted a large chunk of his career to big screen dissections of the gender clash, yet ‘Mr & Mrs Single’ still retains a certain freshness that is surprising considering how well-worn the themes are.

Although Eason Chan and Rene Liu are typically beguiling, it must be said that the majority of the characters set the teeth on edge. Thankfully the focus is on the aforementioned two and, refreshingly, the idea that all the opulent wealth and success that their society simpers after is perhaps not as important as common humanity. In the superficial edifices of the modern world, this intentionally subtle message is no bad thing.