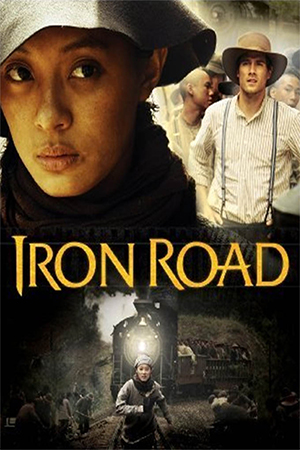 ‘Iron Road’ is a 2008 Canadian/Chinese co-production directed by David Wu (‘Bride With White Hair 2’) and starring the effervescent Sun Li. It takes the format of a 2-part mini-series and chronicles a romance between a feisty Chinese woman (Li) and the son of a wealthy Canadian businessman (Luke Mcfarlane). To a lesser extent, it also details the treatment of Chinese workers building the Canadian railroads in the 1880’s. A slew of top shelf actors (Tony Leung, Sam Neill), beautiful cinematography and an award winning central performance by Li make this one of the better period pieces in recent memory.

The story gets underway when tycoon and hard-nosed businessman Alfred Nichol (Neill) sends his son James (Mcfarlane) on a trip to china to bring back 2000 cheap labour workers. His assets are swiftly dwindling and if he can’t complete his new railroad through Canada within two months, he will lose everything. James has his own reason for taking on the job, as his father believes he is good for nothing, and he hopes that success will lead to reconciliation. Meanwhile in China, a young woman named Xiao Hu eeks out a living selling fireworks. Being an orphan, she pretends to be man to keep herself safe, and dreams to one day make the long journey to ‘Gold Mountain’ in Canada, where her father disappeared many years earlier.

So boy meets boy/girl, and both predictable and surprising events unfold. Xiao Hu finds herself on Gold Mountain and begins to put together the mystery surrounding her missing father. She slowly earns the respect of James with her determination but not all of the railroad bosses are happy with the new ‘guys’ constant questions and snooping, and the brave woman soon finds herself caught in a web of murder and corruption.

David Wu handles direction duties with a firm grasp of both acting and visuals. His no nonsense editing style (seen in everything from ‘A Chinese Ghost Story’ and ‘A Better Tomorrow’ to ‘Crying Freeman’ and ‘Red Cliff’) means the 3 hour plus run time feels far shorter. He finds time for explosions and even a little action amongst the drama, and the stunt work is of a high enough standard for a feature, let alone a TV movie. The location shooting gives the film an authenticity with wide vistas of canyons and blue skies being particularly beautiful. There are of course debits of a mini-series budget, meaning a slightly less epic scope than a film would allow. But Wu’s real talent is in keeping the balance of emotion and drama throughout the entire story. Considering the nature of the real life events, he keeps a firm focus on the intimate, rather than make ‘Iron Road’ an ‘issues’ led story.

What really works is the wonderfully underplayed romance between the leads and solid performances of the supporting cast. Mcfarlane imbues James with a likeable charm and intelligence and isn’t afraid to let himself be led by Li. Good thing too as this is her finest showing yet. She’s tough, brave and smart but also warm, witty and genuine. She doesn’t resort to any theatrics in playing a man and her performance is winning, both in English and Chinese. Tony Leung lends gravitas to the proceedings as a Chinese worker who may or may not be a part of the conspiracy and Sam Neill is a nice addition to the eclectic cast, giving a performance which in limited screen time, gets right to the heart of his character.

Wu sets his characters up well, and he never once loses sight of who they are. This leads to the film’s beautiful and poignant ending. It may not be what the audience wants, and it probably wont leave you warm and fuzzy inside, but consider what we’ve seen of these people over the 3 hour running time it is definitely what the characters would choose. I was enjoying ‘Iron Road’ up to this point, but I think the end transforms a good story into a wonderful one. Powered by Wu’s lean direction and vision and Li’s brilliant star turn, ‘Iron Road’ should win new fans for both. At the very least it shows the kind of quality production that can be achieved by east and west combining forces.