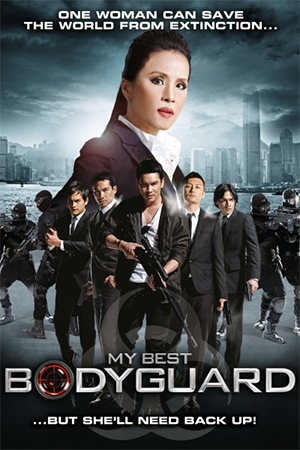 Nicha (Rajakanya) is a tough investigative reporter who discovers a powerful pharmaceutical company is testing its new product on innocent Thai citizens. A small group of these citizens have developed a deadly virus and the company sets out to capture them, dead or alive. Likewise, National Security agents are also hot on the trail of these infected test subjects and Nicha soon finds herself caught in the crossfire. Her ailing father, in an effort to protect her, dispatches ace sharpshooter, bodyguard and all round badass Thach (Yamnarm) to protect her and the group of infected citizens. What follows is a race against time to stay alive, find an antidote and dodge the ever-increasing amount of bullets.

Now as a fan of Thai action cinema and, well, just B-action movies (and with the trailer promising a surfeit of flying bullets and virus dodging shenanigans) this reviewer was hoping ‘My Best Bodyguard’ was going to be a fun romp with some hard hitting Thai action. Alas, this was not to be. As a vehicle for Ubolratana Rajakanya (a real life Thai princess no less!) and her perfectly made up face, ‘My Best Bodyguard’ is a muddled mess, bogged down in cloying melodrama and only slightly saved by the onslaught of action come the second half. Slightly. Really, if they had just stuck to the virus/antidote hunting aspect and concentrated more on the action scenes, this could’ve been fun. Instead we get a lot of disjointed scenes that often don’t make much sense, a glut of characters that just clog up proceedings and intermittent scenes of action that are so clumsily put together they fail to exhilarate.

While this is definitely a vanity project, Rajakanya isn’t that bad for a real life Princess having a go at being a movie star: though she does often look like she’s trying hard not to mess up her perfectly applied make up! Hong Kong star Shawn Yue (‘Dragon Tiger Gate’) pops up as the shady pharmaceutical rep, though he is rather wasted in his limited role. However, he does get a nifty fight with Yamnarm (albeit all too brief!) who does most of the heavy lifting both acting and action wise. In fact, Yamnarm (‘Bangkok Dangerous’) often feels like he is in a different film: a much better and more exciting film than ‘My Best Bodyguard’. The action does get piled on towards the end, picking up the pace, with her Highness even getting in on it: though it’s pretty odd that her character all of a sudden knows how to wield a gun and kick ass having shown no evidence of this beforehand!

There is a good idea for an action thriller buried somewhere in ‘My Best Bodyguard’ but it’s wasted on a cluttered narrative, mostly sloppy action and a whole lot of melodrama daftness.