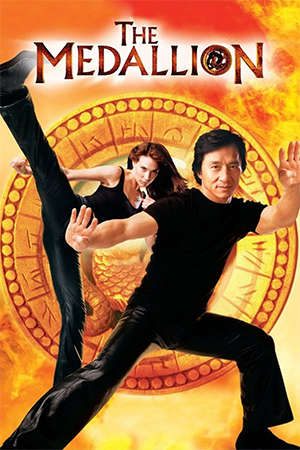 Jackie Chan fans had to wait a long time for ‘Highbinders’ to see the light of day. After filming had wrapped, Jackie had made and released two Hollywood efforts – ‘The Tuxedo’ and ‘Shanghai Knights’ – before ‘Highbinders’ finally got it’s release. A few things had changed however. As Sony were calling all the shots, they decided to change the title to the more Hollywood sounding and less original ‘The Medallion’. In their infinite wisdom they also decided to cut 27 minutes from the final cut making it just 89 minutes long and announced that every version released in around the globe would be identical, with those 27 minutes remaining on the cutting room floor.

Hong Kong Cop Eddie Yang (Jackie Chan) teams up with Interpol to track down international crime lord Snakehead (Julian Sands). Snakehead is at this time after the chosen child Jai (Alexander Bao) who with the power of a medallion can give him supernatural powers and immortality. After Eddie and Interpol fail to detain him, Snakeheads assistant Lester Wong (Anthony Wong) succeeds in abducting Jai. Eddie then follows him to Dublin where he again teams up with Interpol agent Arthur Watson (Lee Evans) and old flame Nicole James (Claire Forlani). In an attempt to rescue Jai, Eddie finds himself trapped in a shipping container with Jai underwater. As the container fills with water Yang uses the merchandise contained within to save Jai at the expense of his own life. With this Jai takes it upon himself to use the medallion to bring Eddie back to life. He soon discovers that not only has he been resurrected but has also acquired supernatural powers and immortality. Snakehead finally succeeds in kidnapping Jai and forces him to use the medallion. However because Eddie has possession of one half, Snakehead only acquires supernatural powers but not immortality. On learning this Snakehead then proceeds to seize the other half from Eddie and after his success Eddie, Nicole and Arthur have to launch a final assault to stop Snakehead.

The big question with ‘The Medallion’ is does it mark a return to form after the lacklustre ‘Accidental Spy’? Well, no it doesn’t. It does seem to suffer from the 27 minutes hacked prior to release as it seems somewhat choppy, characters aren’t fleshed out sufficiently and there are times where events just seem to occur too quickly. However I don’t think that re-instating the deleted footage would improve it that drastically. The main problem with ‘The Medallion’ is it looks just like a Hollywood film with a modest budget. In fact it’s not even as good as his Hollywood films, including ‘The Tuxedo’.

The next question would be surely the action is better than his Hollywood films? Well, yes and no. In the first half of the film there is some improvement, however after the resurrection of Chan’s character the action turns fantasy based and wire aided. While Sammo Hung is one the all time great choreographers he has never really made a name for himself when it comes to fantasy style action. In ‘Encounters of the Spooky Kind’ he used traditional Kung Fu, and in ‘Blade of Fury’ the wirework was comparatively restrained to other films made at the same time. So maybe it was a mistake to have Sammo as choreographer for these sequences as they are uninspiring and dare I say tedious or even boring. Maybe they should have enlisted Ching Siu Tung to choreograph the second half of the film.

At this point ‘The Medallion’ probably sounds like a very bad film. It’s not a very bad film, just not a very good one. In one word, mediocre. The story isn’t exactly original as comparisons to ‘The Golden Child’ are many and justified, though the Dublin locations do make a refreshing change. Jackie Chan still remains as watchable as ever, Lee Evans is often annoying but occasionally amusing, Claire Forlani is charming as is Christy Chung (as ever) in her special appearance. There are also cameos from Nicholas Tse and Edison Chen as waiters. Anthony Wong however is completely wasted in a role that is clearly beneath his talents. To top that his voice has been dubbed making it even worse. In fact most of the Hong Kong section of the film appears to have been shot in Chinese so it would seem that Sony have chosen to dub almost every non English word in the film.

In conclusion, ‘The Medallion’ was never going to be a classic even if it was seen as it was originally intended. However, it is evident that the film has further suffered from it’s mistreatment by Hollywood executives. But if Jackie intends on making Hong Kong films like this I would have to ask why, as this might as well be a Hollywood film. I know he likes to have an international feel to his films but surely the whole point of going back to Hong Kong to shoot a film is to make a Hong Kong style film not a Hollywood style film. If I was to use one word to sum the film up it would be “disappointing”.