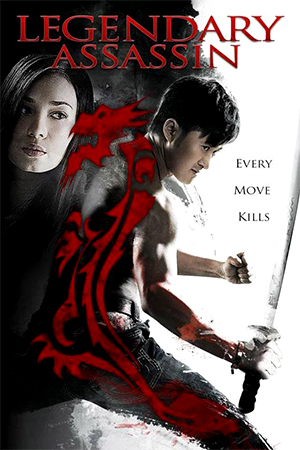 Wu Jing not only takes the lead but also co-directs for this action piece from 2008, but does it deliver the kick you’re after?

Wu Jing plays Bo, an assassin who takes out a crime boss on Hong Kong Island with the usual style of an elite assassin, à la flying feet and fists.  As he sets out to leave the island, a typhoon stops his escape so he befriends a policewoman (Celina Jade) who helps him out until the storm has subsided.  In the meantime the crime bosses’ followers are looking for the assassin and the police are also on the trail of the killer.  With Bo sitting in a police station and both sides of the law after the as yet unknown assassin, can Bo get off the island alive?

Well, that’s the question but what about the film?  As an action fan it does have some memorable scenes, the first being Wu Jing against 3 henchman, one played by Ken Lo. This sequence really shows Wu’s natural ability to shine in the Martial Arts film arena, with a brutal and stylish flurry of moves that really get the film off to a great start.  Unfortunately though, that’s all you get until the final scene.  In between there’s a lot of people running around looking for the assassin and not really doing much else.  The chemistry between Wu and Celina is pleasant I guess, but there’s not much more going on to hold your attention until the final reel.

The action scene at the end of the film is its bread and butter, where Wu unleashes hell in a rain-set final showdown with the boss’s henchmen.  The bone crunching style of the previous fight is used again to great effect, as Wu dispatches of them all in a series of beautifully choreographed moves that almost make it all seem worthwhile.

So, not a complete disaster but by no means the showcase that Wu Jing was no doubt hoping it would be. There’s potential here for Wu Jing to build his career and I look forward to the next high-octane fight fest he’s in. Until then, pick this up for the fights and sit back and enjoy the new kid on the block.