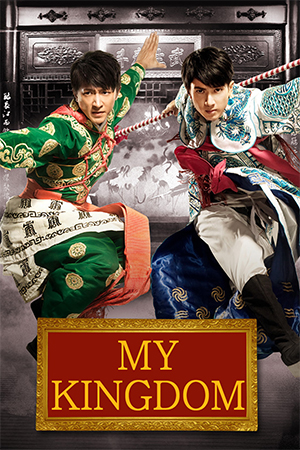 Five year old Erkui is saved from the same sad fate as the rest of his extended family – publicly executed on the orders of the Prince – by opera star Master Yu (Biao) who then adopts him as his new disciple, trained alongside seven year old adopted son Guan. As they grow together as brothers, Erkui and Guan learn the skills of their master who has recently been given a plaque by the Prince proclaiming him ‘The Greatest Warrior’. A Shanghai Opera star travels to the capital to challenge this aforementioned accolade and defeats Yu, leaving his career in tatters. As the two boys grow they vow to avenge Master Yu and, when they come of age, travel to Shanghai and put their plan into action.

Boasting Sammo Hung as action choreographer and minor appearances by Yuen Biao and Yu Rong Guang, ‘My Kingdom’ intentionally or unintentionally recalls an era in Hong Kong cinema that was tightly packed with genre classics and sterling efforts. A persistent memory of former decades does little to endear the viewer to ‘My Kingdom’, a turgid mix of drama and fight action that massively over-ripens the former while letting the later die on the vine.

Within a few minutes it is obvious that ‘My Kingdom’ will not be an exercise in originality. The familiar dynamic of two sworn brothers is set in concrete within a few frames while the eventual rivalry between them, their love for the same woman etc, is as tediously predictable as a binary knock-knock joke.

There is a way to make cast-iron clichés more malleable, to give the audience a confidently-handled experience while not letting familiarity breed contempt. This uninteresting cross between ‘The Bund’, ‘Stage Door Johnny’ and nearly every romantic drama ever conceived is not. Of course, hope is dangled in front of us like a particularly juicy carrot – a fine duel between Yuen Biao and Yu Rong Guang qualifies as the said veggie seduction – but once the story anchors itself in CGI Shanghai, such enticements turn into bacterial soft rot.

China adds another melodramatic, yet ironically sterile and uninvolving drama to its prodigious arsenal. Despite my vitriol it really isn’t that bad, but it’s just so generic, so riddled with the current Chinese cinematic pox that it is impossible to care about. Some will derive some enjoyment from losing themselves in the eyes of the utterly gorgeous Barbie Hsu or Sammo’s finely-crafted action, yet there really isn’t enough of either to stir the soul.