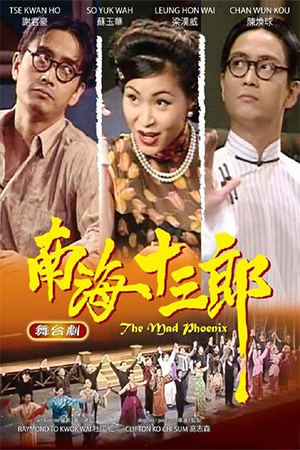 The successful team of director Clifton Ko and screenwriter Raymond To notched up a surprise hit with the sentimental biopic ‘I Have A Date With Spring’ in 1994. Three years later, the pair turn their attention to the tempestuous life of Cantonese Opera playwright Kiang Yu-Kou, an award-winning turn by renowned actor Tse Kwan Ho.

The son of a wealthy bigamist, Kiang Yu-Kou is a precocious child whose intellect is only matched by his arrogance. As he matures, Kiang spends his evenings watching traditional Cantonese Opera and writing his own inventive variations of them, confident that he will soon be working in the artistic field. Eventually the opportunity he waits for finally comes and the young writer quickly establishes a reputation as a temperamental genius. After a moment of self-sacrifice sees Kiang end his fruitful partnership with his gifted protégé, the quietly vulnerable artist’s career is shattered by the Japanese invasion of Shanghai. Kiang struggles to adapt to life under occupation and his integrity means he squanders the chance to become a screenwriter for his actress niece. What follows is the once-revered craftsman’s gradual descent into poverty and mental breakdown, while his past friends find the help they offer to be of little lasting benefit.

There is unquestionably something tragic about seeing a genius in a certain field succumb to mental illness due to the sheer pressure they put themselves under; despite its very glossy veneer, ‘A Beautiful Mind’ was a periodically accurate example of acumen pushed beyond its limits. The heart of ‘The Mad Phoenix’ is the said virtuoso who certainly has the poignancy within his life to enable an effective work of cinema to be created. Unfortunately, Clifton Ko’s unsteady, wasteful direction means that this is a potentially emotional examination that is squandered by its execution.

To appeal to a wider audience – and one that isn’t especially savvy with Cantonese Opera – Clifton Ko needed to show what made his lead such an outstanding artisan and what set him apart from his envious contemporaries. Ko and his writer Raymond To never flesh out this sense of achievement and we never appreciate just how different Kiang’s work is from his rivals – by ignoring the exposition of such information, Ko renders this a parochial work at best. Even when our fragile anti-hero does ascend to the heights of fame, there is rarely a sense that he is really being showered with glory by his adoring public. Apart from a few comments by supporting characters, Ko does not infuse the narrative with a real sense of Kiang’s status at his height. Such short-sightedness means that his eventual fall from grace lacks a definite impact.

Though the first half of ‘The Mad Phoenix’ suffers from such problems, the second fifty minutes is even more guilty of expressing the skills of a director better suited to comedy and melodrama than such a tragic story. Kiang’s descent into a total breakdown should be piteous, but it is only the final shots of his death that have any emotional weight. The mental illness that blights the genius is handled in a half-comic way that lends more to the similar scenes in ‘Tai Chi Master’ rather than a proper examination of the troubles. It’s a real shame that a condition so often misrepresented on screen is once again cliché-ridden – Tse Kwan Ho is a performer well capable of achieving the needed balance, but still comes across like a cruel parody in certain scenes.

‘The Mad Phoenix’ has moments that offer the kind of promise that make the finished product all the more disappointing. A few early scenes show a captivating mixture of reality, fantasy and nostalgia that would have benefited the overall effect of Ko’s work. Nevertheless, such moments are gradually swept under the carpet in favour of the more mundane; it would be very interesting to see Riley Yip’s handling of such material given his past triumphs with such themes. It is only the closing shots of the homeless on the streets of Hong Kong that demonstrate that Clifton Ko can put pathos in his material without lurching into melodrama or misplaced humour. Such moments, though, are too few for ‘The Mad Phoenix’ to shine.